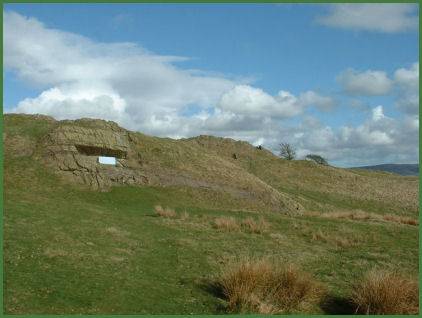 George Fox (July 1624 - 13 January 1691), the founder of the Quaker movement or the Society of Friends, preached extensively in the north of England in 1652.

On reaching Sedbergh in June of that year, on 13th June he visited an isolated chapel on Firbank Fell, located a few miles from the town, where from the nearby outcrop of rocks he preached to a congregation of more than a thousand people for three hours. The place has became known as Fox's Pulpit.

Fox described the event in his journal:-

'While others were gone to dinner, I went to a brook, got a little water, and then came and sat down on the top of a rock hard by the chapel. In the afternoon the people gathered about me, with several of their preachers. It was judged there were above a thousand people; to whom I declared God's everlasting truth and Word of life freely and largely for about the space of three hours.'

Next to Fox's Pulpit stands a disused burial ground enclosed by drystone walls. Quakers were were forbidden burial in consecrated ground or in churchyards. They buried their dead on private land. The chapel which once occupied the site was ruined during a storm of the winter 1839-40 and was later rebuilt on the other side of the fell.

In 1952, the tercentenary year of the founding of the Quaker movement, a plaque was errected to commemorate Fox's historic visit.

The Inscription on the Plaque


Here or near this rock George Fox preached to about one thousand seekers for three hours on Sunday, June 13, 1652. Great power inspired his message and the meeting proved of first importance in gathering the Society of Friends known as Quakers. Many men and women convinced of the truth on this fell and in other parts of the northern counties went forth through the land and over the seas with the living word of the Lord enduring great hardships and winning multitudes to Christ.

From Sedbergh, take A684 to Kendal. After about 2 miles take right hand turn opposite junction with B6256. The site lies on the right ofthe road after walking 50 metres down a public footpath.


Further information on Quakers in Cumbria