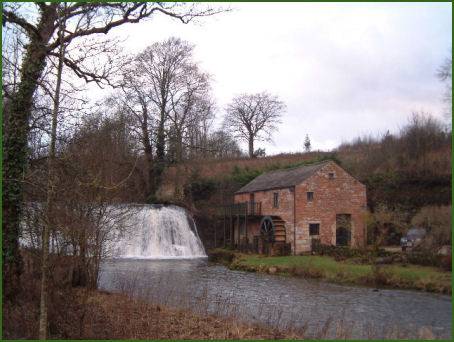 Rutter Force lies in an idyllic and unspoilt setting on Hoff Beck and is situated near to the settlements of Appleby-in-Westmorland and Great Asby in Cumbria's beautiful Eden Valley.

The picturesque warm red sandstone building near the waterfall and ford once served as a corn mill and retains its waterwheel, although it is has now been converted into self catering tourist accommodation.

There is a short walk from the historic market town of Appleby-in-Westmorland to Rutter Force which takes in some stunning scenery along the River Eden.


A walk to Rutter Force from Appleby

*Commencing at the gates of Appleby Castle at the top of Boroughgate, turn right along the road and follow the wall which surrounds the castle, climbing the castle bank toward the River Eden. Pass through the kissing gate on your right and proceed along the path by the river .

*Enter the woods via the path and climb a flight of wooden steps bearing away from the River Eden. Proceed along the top of the bank until reaching a knoll.

*Follow the path down to a footbridge, climb again. On reaching the top of the hill, continue with the hedgerow on the left and turn left, as the path widens, turn right to the railway under the pass. Follow along the farm track joining the road at Great Ormside.

* Turn right along the road passing under another railway bridge. On reaching the crossroads, go straight ahead, on reaching an isolated house, turn right, crossing a stile and continue upwards to cross a further stile.

*With a fence on your left cross another stile before descending onto a road. Turn left along the road and then right to find the lane to Rutter Force.