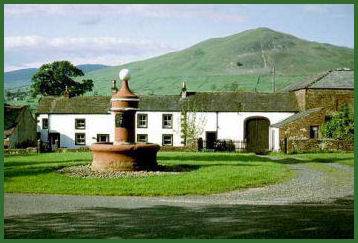 The characterful red sandstone village of Dufton lies in the beautiful Eden Valley, in the shadows of Dufton Pike. The village is around three miles north of the town of Appleby-in-Westmorland. The area is known as the East Fellside, on the slopes of the northern Pennines below Cross Fell. The Pennine Way, Pennine Bridleway and the Sustrans Pennine Cycleway all pass through Dufton.

The large and attractive village green, dissected by an avenue of limes, is surrounded by cottages and farms. A red sandstone fountain fountain stands on the green, errected by Mr. Wallace of the London Lead Company. A translation of its Latin inscription reads:-

'There is a clear pool, whose waters gleam like silver. It is not tainted by shepherds, or by their she-goats grazing on the mountain. Nor is it muddied by cattle, or by birds or wild animals, or by a branch fallen from a tree.'

The company also built many of the cottages in the village for their workers. The Stag Inn, which stands in the heart of Dufton overlooking the village green, dates from 1703, the Stag is a classic country inn with oak beams and a large cast iron range. The pub serves excellent food. 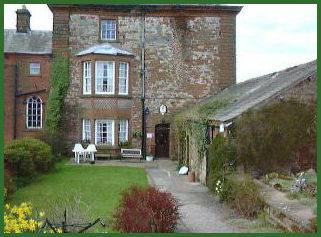 Dufton's most famous son was John Boste (1544- 1594), a Roman Catholic missionary priest who was imprisoned and interrogated in the Tower of London and executed at Dryburn during the reign of Elizabeth I. John Boste was beatified by Pope Pius XI in 1929. He was canonized by Pope Paul VI in 1970.

Dufton Hall dates from the seventeenth century, and is part of the medieval manor of Dufton, it was once held by the local influential Greystoke family and passed to the Dacres and then the Howard family through marriage. The hall now serves as a bed and breakfast establishment.

St. Cuthbert's Church lies in a country lane between the villages of Dufton and nearby Knock, and serves both villages. The red sandstone building dates to the eighteenth century and replaced an earlier, thirteenth century building on the site.

Nearby Dufton Ghyll, an attractive wooded valley, is a nature reserve in the ownership of the Woodland Trust, red squirrels can often be sighted there.


A walk to High Cup Nick from Dufton

*Commencing at the car park in Dufton, follow the road in the direction of Appleby-in-Westmorland. Where the road turns right continue straight ahead along a lane. At the point where the track divides begin to ascend with the conical shaped Dufton Pike to your left.

*On reaching a col the track descends slightly after which it enters a steep sided valley. Remain on the track until reaching a shooting cabin. From this point Great Runsdale Tarn is just over a hundred metres south.

*On reaching the tarn turn left and continue along the shore to the outflow. Follow this beck downstream for around 2.5 km. On reaching a footbridge over the beck, turn right to follow the Pennine Way.. Continue across a limestone pavement to arrive at High Cup Nick from which the views are spectacular.