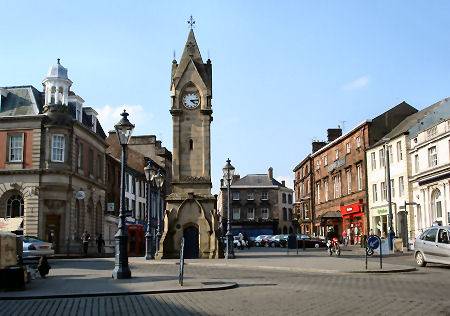 An ancient and historic market town, Penrith, once the capital of Cumbria, stands in the Eden valley north-east of Ullswater. The town, which is located just outside the boundaries of the Lake District National Park, is an important shopping centre and has a long and varied history.

In the ninth and tenth centuries Penrith was the capital of the ancient kingdom of Cumbria. The origins of the town's name are uncertain and contoversy surrounds the issue, but it is thought to derive from either the Celtic words 'penn' and 'rid' meaning 'hill ford' or 'Pen Rith' which means 'red town'. The Cumbric language, a form of Brythonic Celtic, persisted in the area until the eleventh century.

Penrith was originally constructed around a network of defensive gates, through which the population would herd their livestock into the safety of the centre in the event of raids by the Scottish border reivers, a common feature of life in the north of England in medieval times. The gates diappeared long ago, although their names, such as Stricklandgate and Middlegate remain as an echo of former times.

The modern town centre still comprises of the old market sites of Dockray, Castle Mart, Corn Mart and Market Place. Burrowgate and Sandgate are the town's oldest streets and date back to the thirteenth century.

In common with many towns in the Eden Valley, Penrith is largely made up of the local red sandstone which lends it a warm appearance. It offers a wide range of accommodation and contains a great deal of restaraunts and wealth of specialist shops, offering an interesting choice of goods and fine foods, while characterful narrow alleyways connect its main streets.

During the Civil War, Penrith was occupied by Cromwell's troops in 1654. Bonnie Prince Charlie also passed through the town, during the famous but ill fated Jacobite rising of 1745, in attempt to reclaim England's throne for the Stuarts. Prince Charlie is said to have had lodgings in the town's George Hotel.

A month later his Highland army was forced to retreat northwards, having not gained the support they had anticipated on their march south through England. His rearguard fought a battle with government troops at Eamont Bridge on the southern outskirts of the town. A candelabra was later presented to St. Andrew's church by the government army's ruthless commander, William Duke of Cumberland, the son of George II, in recognition of Penrith's loyalty during the rebellion.

The mother of Lakeland poet William Wordsworth was a native of Penrith, his grandfather, William Cookson, once owned a house in Devonshire Street, the house is now gone and its site occupied by a shop. Wordsworth Street acquired its name from William's cousin, Captain John Wordsworth, who lived in one of the two houses which were converted into the Town Hall in 1905.

The imposing red sandstone ruins of Penrith Castle, or the 'Castle of the Kings' as it was once known, dates from the medieval era. The building is now in the care of English Heritage. Work on the castle was begun in 1397 by William Strickland, later Bishop of Carlisle, in response to the Scots burning Penrith. 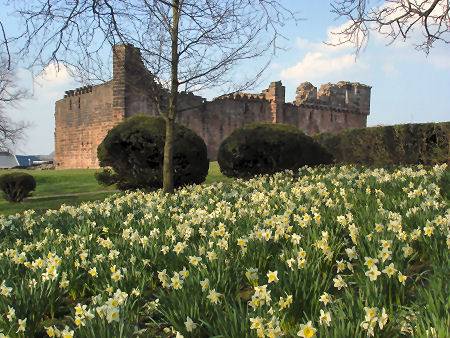 The Parish Church of St. Andrew's built in the local red sandstone, dates mainly from 1722, although its west tower is the remnant of an earlier church which stood on the site in the thirteenth and fourteenth centuries, with walls that are six feet thick, it proudly displays the bear and ragged staff heraldic emblem of the Earl of Warwick, a powerful local magnate who became known to history as 'Warwick the Kingmaker'.. 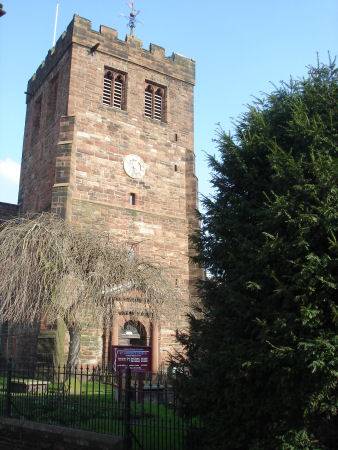 A grade I listed building with walls some six foot thick, the tower provided refuge during times of border warfare. In 1374 an order was issued to the inhabitants of Penrith to repair the bell tower.

The grave of Owen Cesario, King of Cumbria, in Penrith Parish Church 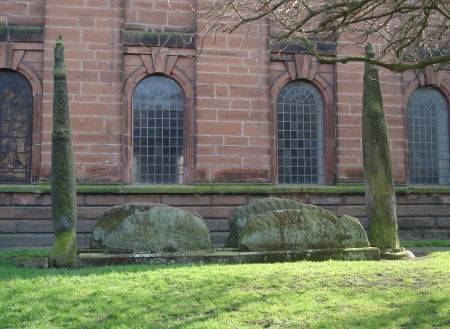 The grave of Owen Caesario, claimed to be an early King of Cumbria of gigantic stature, can be seen in the churchyard, at either side stand two large wheel crosses which curiously display a mixture of both Christian and Viking carvings. 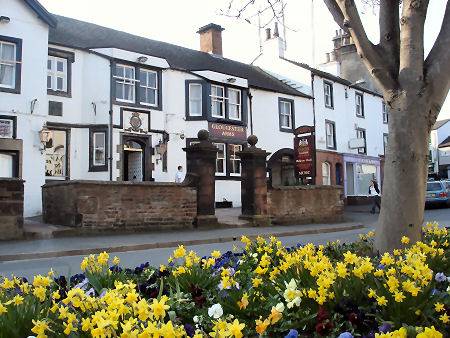 Near the church stands the Tudor building which was once Dame Birkett's school, attended by the poet William Wordsworth, his sister Dorothy and his future wife, Mary Hutchinson, which is now a restaurant. Wordsworth revisited Carlisle twice in the 1790's, when he stayed at the Robin Hood Inn, which now has a plaque commemorating the fact. He also stayed with his cousin at Wordsworth House.

The former Dockray Hall, situated in the town centre, dates from 1477. King Richard III, when Duke of Gloucester reputedly lodged there while he was carrying out alterations on Penrith Castle. It now serves as the Gloucester Arms, (pictured left) although not all of the original building survives. The arms of Richard III are displayed in the stonework above the door.

Penrith has a large number of wells in and around the town, and well-dressing ceremonies were once commonplace in May.

King Arthur's Round Table near Penrith is a much altered prehistoric henge henge complex, which has a bank outside and two entrances. It was used for religious purposes and probably dates to the Neolithic Era. It lies a few hundred yards from Mayburgh Henge, Penrith, in a field at the corner of the A6 and the B5320 to Ullswater.

At the northern end of Penrith, Beacon Hill stands guard over the town. There is a footpath up to the summit of the hill, which makes an excellent viewing point over the Eden Valley and its surrounding fells. In medieval times, Beacons were lit on the hill to warn of impending raids.