Hutton in the Forest 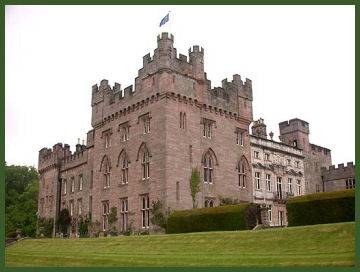 Hutton in the Forest, near Penrith, is a beautiful historic house.

The sandstone facade dates from Stuart times. One of the flanking battlemented towers is a pele tower which originally was surrounded by a defensive moat. The tower built in around 1350 by Thomas de Hoton or Hutton, who was hereditary keeper of the Royal Forest of Inglewood, which once spread from Penrith to Carlisle. The other Victorian Gothic tower was added in the nineteenth century.

The interior of the house is a mixture of Regency and Victorian rooms, featuring original William Morris wallpaper and contains beautiful collections of furniture and paintings, ceramics and tapestries. One of the portraits depicts Sir Henry Vane, a Parliamentary supporter during the Civil War who was executed on Tower Hill after the Restoration of the monarchy.

The castle was once home to the De Hoton family, and is now the home of Lord and Lady Inglewood, it has remained in the ownership of the Fletcher family since 1605 when the estate was purchased by Richard Fletcher of Cockermouth. 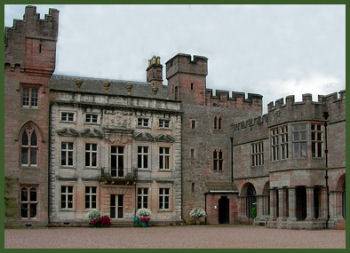 The eleven acre landscaped grounds contain seventeenth to ninetenth century topiary and terraces, a walled garden dating from the eighteenth century which contains a fine collection of herbaceous plants and fruits and a restored seventeenth century dovecote. A formal terrace leads behind the house to rhododendron and azalea garden designed in 1870 by Anthony Salvin.

The house is surrounded by the magnificent woodland of the medieval forest of Inglewood, visitors can enjoy the woodland walk to the north and west of the house.

Hutton in the forest is the legendary Green Knight's castle in the Arthurian tale of Sir Gawain and the Green Knight, in which Sir Gawain 'rode into a deep forest that was wonderfully wild,' and after encountering the Green Knight rode with him to his 'castle of Hutton'.

St. James church in the grounds, was restored by Anthony Salvin in the nineteenth century, it contains an interesting fragment of a Norse cross and a number of memorials to the Fletcher and Vane familes.