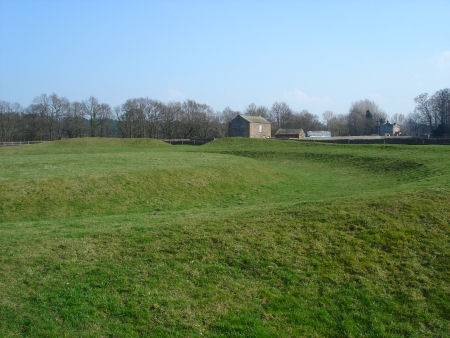 King Arthur's Round Table at Eamont Bridge near Penrith is a prehistoric circular earthwork surrounded by a ditch and an outer bank situated near the confluence of the Rivers Lowther and Eamont.

The monument dates from the Neolithic era, about c. 2000 BC and measures 90 metres in diameter, it once had two entrances, but only the south east entrance now survives to the present day.

The monument has suffered much alteration due to the construction of nearby roads, and in the early 19th century, when the landlord of a local pub set up a tea garden in the inner circle of the henge. Surviving sketches of the henge dating from the 17th century suggest that there may have been large stones set beside the entrance, but these have long since dusappeared without trace.

A smaller henge known as the Little Round Table stood 75 metres to the south but was destroyed in the nineteenth century.

There is believed to be a connection beween King Arthur's Round Table, and nearby Mayburgh Henge , which stands only 400 yards away.

The site is owned by English Heritage.

From the A66 roundabout just outside Penrith, take the A10 towards Shap. Cross the bridge over the river Eamont and turn right on the corner of the Crown Inn. King Arthur's Round Table is located in the opposite field.