Historic Brougham Hall is a thirteenth century fortified manor house, located at Brougham village, which lies two miles to the south-east of Penrith.

The Hall, which stands high above the River Lowther, was founded in the medieval period by Gilbert de Broham, the stone hall dates from 1307, when it was constructed by Richard de Brun of Dummaloch, who was granted a licence to crenellate the building.

By the sixteenth century a large and complex range of buildings existed on the site, including a manor house, a byre and a gate, to which a seventeenth century pele tower was added.

The Brougham family became extinct in the male line in 1608 and the estate eventually passed into the hands of the great Westmorland heiress, Lady Anne Clifford, who was responsible for the restoration of many of the properties she inherited in the area. Extensive renovations were carried out to the hall by Lady Anne, who later sold it to her agent James Bird in 1676.

Brougham Hall was again acquired for the Brougham family when John Brougham of Scales brought the estate in 1726, when the hall became the family seat of the Lords Brougham and Vaux. The Hall was largely rebuilt from 1829 to 1847 and again in the 1860s when it became the home of the Lord Chancellor, Lord Brougham. Brougham Hall reached its zenith in Victorian times when it acquired the name of ' the Windsor of the North' due to royal visits by King Edward VII and his son, the future King George VI, who became regular guests. 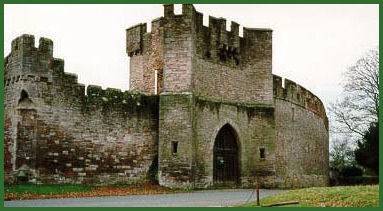 Brougham Hall again passed out of the ownership of the Brougham family in 1934 and rapidly fell into decay. An extensive programme of restoration which was to become England's most ambitious country house restoration project was commenced in 1985.

A superb scale model of the Hall can be found in the museum, and a charming Cromwellian chapel of St. Wilfred, built by Lady Anne Clifford, stands alongside the hall. The chapel replaces an earlier church on the site and contains some superb medieval woodwork placed there by Lord Brougham in the 1840's.

The Hall also features food and gift shops, and a café selling snacks, cakes and refreshments in the outer walls. Small workshops and businesses now occupy some areas of the hall. For more information consult the Brougham Hall website at www.broughamhall.co.uk