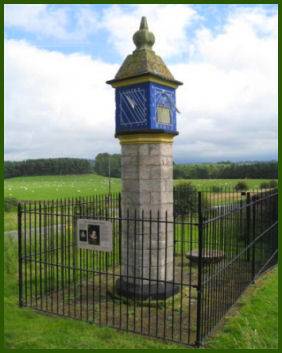 The seventeenth century monument known as the Countess Pillar stands where the road from Brougham Castle meets the A66 road between Penrith and Appleby -in -Westmorland.

The monument, errected by the Westmorland heiress, Lady Anne Clifford, consists of an octagonal pillar and a low table of local stone. The pillar, which stands at the roadside, supports a square capital, surmounted on three sides by sundials, the fourth side displays a pair of heraldic shields. The monument's inscription reads:-

"This pillar was erected, in the year 1656 , by Anne, &c. for a memorial of her last parting with her pious mother, Margaret Countess Dowager of Cumberland, on the 2d of April, 1616 ; in memory whereof she hath left an annuity of 4l. to be distributed to the poor of the parish of Brougham, every 2d day of April for ever, upon the stone table placed hard by. Laus Deo!"

Lady Anne was deeply attached to her mother, Margaret Russell, both are buried at St. Lawrence's church, in the old county town of Appleby-in-Westmorland, where an effigy of Countess Margaret can be seen as well as a black marble monument to Lady Anne. She erected the Countess Pillar in her memory in 1656 on the spot where she said farewell to hermother, before her death in 1616, Lady Anne had been absent from the deathbed.The monument is now in the care of English Heritage.

Nearby stands the Dolestone, where for many years Lady Anne annually distributed alms to the poor in remembrance of her mother. There are a number of well marked footpaths in the area.