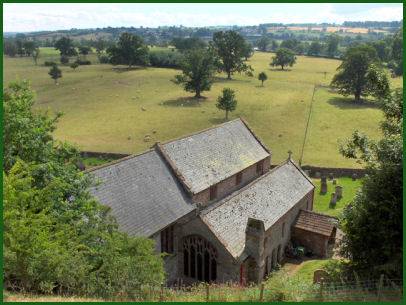 The Cumbrian village of Kirkoswald is situated eight miles northeast of Penrith. Once a thriving market town, it boasts some stylish Georgian buildings, a quaint cobbled market place and a seventeenth century inn. The buildings are mainly of the local red sandstone.

Kirkoswald was granted its market charter in the thirteenth century. An annual fair was once held on St Oswald's day, 15th August.

The name means the church of Oswald. St. Oswald was a seventh century tribal king of the Anglo-Saxon kingdom of Northumbria who reigned from 634 to 642 and converted the area to Christianity.

The parish church of St. Oswald (pictured left), is situated on the southern edge of the settlement, parts of the building date back to the twelfth century and replaced an original Saxon church which once occupied the site. The chancel is of sixteenth century origin. The nave boasts impressive arcades of arches dating from both Norman times and the thirteenth century. St. Oswald is depicted in the attractive east window, along with St Cuthbert, the crucified Christ and the four Evangelists.

The churchyard contains ancient carved grave covers, which include one which dates back to the Anglo-Saxon period. On the West side of the Church, within the church wall, lies St Oswald's Well, which source is unknown. A sacred spring lies beneath the nave of the church. Surmounting a grassy hilltop about two hundred yards from the church stands a detached nineteenth century stone bell tower (pictured right). A bell tower is thought to have occupied the summit since Norman times.

'The College' is an impressive building and one of the most handsome in Kirkoswald. It was once a pele tower, built as a form of defence from Scottish border raids, which were a common feature of life in the north of England during the turbulent Middle Ages. The building dates back to 1450. The tower was rebuilt in 1523 by Thomas Lord Dacre, whose arms can still be seen displayed above an external door. The building was later converted to a college for priests and still later became the home of the influential Fetherstonhaugh family of Kirkoswald Castle.

Red sandstone Kirkoswald Castle, once recorded to be 'one of the fairest fabrics that eyes looked upon, having a great hall, one hundred yards long, ornamented with pictures of all the kings of England', now sadly stands in ruins. The castle was destroyed during the reign of the ill fated King Edward II, during a raid by the Scottish King Robert the Bruce in 1314, but was rebuilt in the fifteenth century. After the death of Thomas, Lord Dacre in 1525, many of the castle's internal fixtures were transferred to Naworth Castle. All that now remains of the building is the tower, which rises to some sixty feet high and is surrounded by a wide moat. The castle may be viewed from a nearby public footpath although, due to its present unsafe condition, there is no public access to it.

Two miles to the north west of Kirkoswald is the Nunnery Walks nature trail, which passes through pleasant woodland and past Croglin Water. The nunnery, which dates to the fifteenth century was rebuilt in the eighteenth century in the elegant Georgian style. It now serves as a guesthouse.