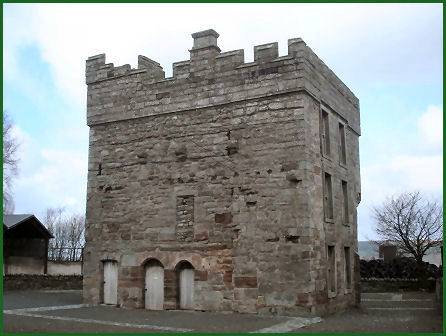 Clifton Hall is situated in a farmyard across the road from St Cuthbert's church at the village of Clifton which lies around two miles to the south of Penrith.

A small red sandstone pele tower, Clifton Hall stands at three storeys high and measures 33 feet by 26 feet. Dating to the fifteenth century, the tower is the only surviving part of a manor house which once belonged to the Wybergh family, it was built by either Elianor Engaine or her son-in-law William Wybergh. A window is dedicated to Eleanor Enguyne at St. Cuthbert's Church opposite the hall, it displays the family coat of arms, a monument also commemorates her marriage.

Its windows are larger than those of older pele towers, nor does it have the massive walls typical of such structures. The ground floor consisted of a single room with a partitioned west end, a stair leads to the upper rooms and the roof. 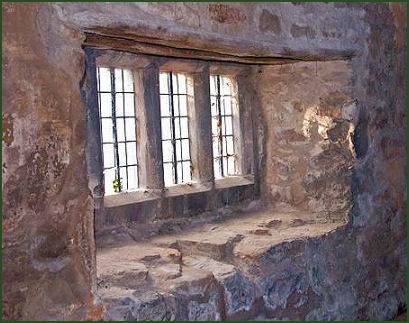 At the outbreak of the Civil War in 1642, Thomas Wybergh supported the Royalist side. He was accordingly fined by Parliament as a Royalist "delinquent" in 1652, and mortgaged the surrounding manor, (with the exception of the hall and lands to the north) to Sir John Lowther for £846. Unfortunately the mortgage led to a prolonged legal dispute, and in 1706 John Lowther's grandson successfully claimed the mortgaged estates, in exchange for giving the Wybergh's £400. Further work was carried out on the property in the early eighteenth century. During the first Jacobite Rebellion of 1715, William Wybergh, the owner, was abducted by the Scottish forces.

Clifton Tower was plundered by Jacobite forces in 1745 prior to the Battle of Clifton Moor, which bears the distinction of being the last battle fought on English soil. The battle was fought between the forces of the Stuart Pretender Bonnie Prince Charlie and those of William, Duke of Cumberland, later to earn the name 'Butcher Cumberland' at Culloden. In St Cuthbert's churchyard opposite the tower, ten men killed in the battle lie buried. A stone near the churchyard gate commemorates the event.

The story of the Wybergh family is related in Sir Walter Scott's novel, 'Waverley', which also features the battle on Clifton Moor.

The tower is in the care of English Heritage, admission is free.


Castles and Stately Homes of Cumbria