The southeastern part of the Lake District National Park is the best known and most visited area. Spectacular Lake Windermere is the largest lake in England, measuring ten and a half miles long and a mile and a quarter across at it's widest point, with a depth of up to 220 feet. The lake is so large that it has a slight but discernable tide. 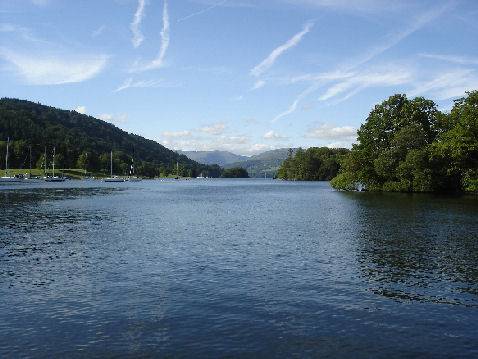 Windermere is also the most commercialized of the English Lakes and a tourist magnet, which can often be very crowded in the spring and summer months, particularly along the east bank and parking spaces in the area can often be difficult to find. The less populated west bank of the lake is generally much quieter.

The lake has three principal towns on its east bank, the twin towns of Bowness and Windermere, and Ambleside which lies further to the north. Bowness has its origins in the 11th century, when the area was colonised by the invading Vikings, the name is said to derive from the Old Norse 'bogi nes' meaning 'promontory shaped like a bow'. The town has now merged with Windermere town, originaly the hamlet of Birthwaite, which owes its development to the arrival of the Kendal and Windermere railway, the establishment of which was staunchly opposed by the poet William Wordsworth, concerned that the influx of visitors would spoil the natural appeal of the lake.

Ambleside is a major Lake District resort and it is a convenient base for a holiday in the area. Lying five miles north-west of the town of Windermere, Ambleside has been a settlement since pre-Roman times, although the present town largely grew up in the Victorian era. Orrest Head, above the town is considered by many to be the best viewpoint over Windermere. At 784 feet, some stunning views over the surrounding area may be had from its summit.

The surrounding scenery becomes progressively higher and more rugged to the north, and the lush wooded hills which surround the southern section, magnificent when clad in Autumn colours, give way to the rugged grandeur of the often cloud capped Langdale Pikes, which are clearly visible from the mid and north sections of the lake.

Waterhead at Ambleside, the northern section of the Lake 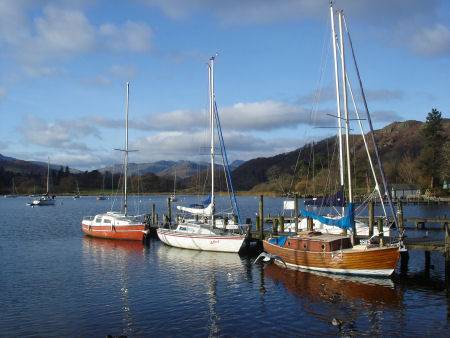 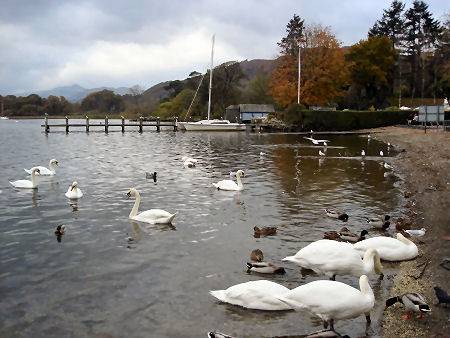 The name Windermere has it's origins in the tenth century when a Norse chief called Vinand bestowed upon the lake its name of 'Vinand's Mere.' As late as the the eighteenth century, the poet William Wordsworth often referred to the lake as 'Winandermere' in his writings and was a frequent visitor.

The lake is dotted with wooded islands, in all eighteen of them, the largest of which is the 40 acre Belle Isle, which lies just opposite Bowness and was once owned by the Curwen family, friends of Wordsworth. Formerly known as Long Holme, the island was renamed in the late eighteenth century in honour of Isabella Curwen, whose husband then purchased the island. Remains dating back to Roman times have been discovered on Belle Isle. It contains England's earliest completely round house, built in 1774 for an influential Nottingham merchant, Thomas English, at a cost of £5,000. Wordsworth disliked the building and scathingly referred to it as a "pepper pot". The house underwent extensive restoration after a disastrous fire in 1996.

Lake Windermere, the northern section of the lake, near Ambleside. Click to enlarge 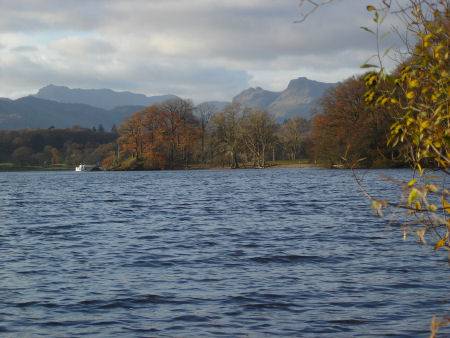 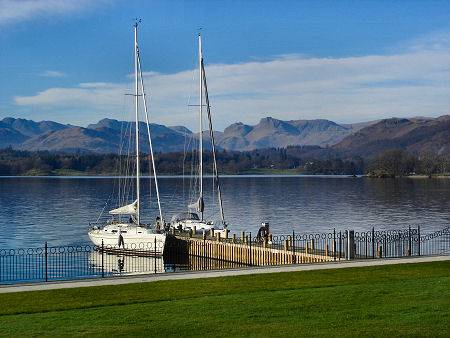 The island was the subject of a minor seige during the English Civil War, Robert Phillipson, a local Royalist officer, was besieged by the Roundheads lead by Colonel Briggs, who fired cannon at the island from Cockshott Point, but his brother conducted a timely rescue. Burning with resentment at Briggs, Phillipson wildly rode his horse, sword in hand, into Kendal Church and attempted to abduct Briggs during the course of the service. He was chased out by the outraged and indignant congregation. Leaving in haste, Robert left his sword and helmet behind, which can still be seen on display at the church today.

The other smaller islands, owned by the National Park Authority, the National Trust, and the Royal Windermere Yacht Club, include Crow Holme, Hen Holme, the Lilies of the Valley, (There are two islands of this name, distinguished as East and West) Maiden Holme, Silver Holme, Thompson Holme and others. Holme is an old Norse word meaning 'island'.

Windermere is a centre for all forms of water sports including sailing, water skiing and fishing and is the headquarters of the Royal Windermere Yacht Club. Rowing and motor boats can be hired and steamers also operate regular passenger tours of the Lake from Bowness and Ambleside. The Windermere Ferry service runs from Ferry Nab on the east shore of Windermere to Ferry House at Far Sawrey on the quieter west bank and is provided by the Highways Department of Cumbria County Council, it takes cars as well as foot passengers. The ferry runs all year except for Christmas Day and Boxing Day. There is often a queue for the ferry in the summer months, with signs indicating how long the wait is expected to be. 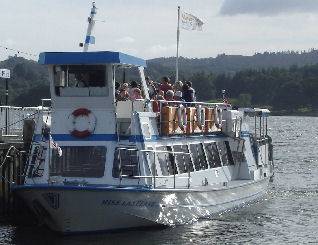 Stagshaw Gardens, situated south of Ambleside are well worth a visit. The gardens were created by Cubby Acland, who was employed as a regional agent for the National Trust until his retirement in 1973. The gardens host a superb collection of rhododendrons, azaleas, magnolias, ericacious trees and camelias and are particularly beautiful in spring, when they are awash with a carpet of bluebells. 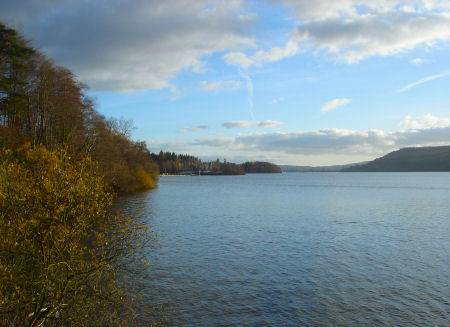 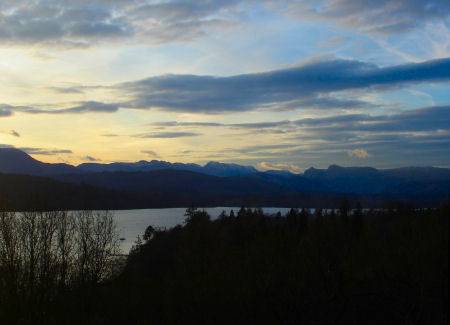 Across the lake from Ambleside, the turrets of Wray Castle are clearly visible on the west shore. The imposing castle was built in 1840 by a wealthy Liverpool surgeon, James Dawson, whose wife had inherited a fortune from a gin business. The castle is built in the Gothic Revival style and is now owned by the National Trust. Wray Castle was the first holiday home of Beatrix Potter in the Lake District. The attractive grounds, containing a superb collection of specimen trees are open to the public.


Places to Visit around Windermere

*The National Park Visitor Centre at Brockhole, on the shores of the lake, just south of Ambleside, hosts a programme of guided walks and exhibitions.

*Wray Castle Victorian Gothic Revival mansion on the shores of Lake Windermere with superb grounds which are open to the public.

*Galava Roman Fort -at Borrans Head, Waterhead, Ambleside, was was built around 79A.D., as one of a series of fortified structures constructed to defend Roman trade routes across Cumbria.

*The Aquarium of the Lakes, at Lakeside, an award winning visitor attraction, which recreates various themed habitats of the Lake District.

Some good viewpoints over the lake are:-

*Brant Fell - near Bowness, offers panoramic views over the lake

*Orrest Head - situated above Windermere Town, considered to be one of the best viewpoints over Windermere