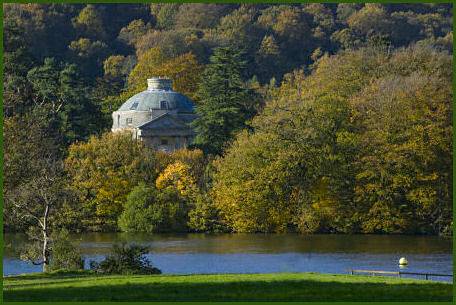 Wooded Belle Isle, which covers 40 acres, is the largest of a total of eighteen islands on England's largest lake, Lake Windermere and lies opposite to the town of Bowness.

It is the only island on the lake ever to have been inhabited and remains dating back to Roman times have been discovered there. The Roman governor of Ambleside once erected a villa on the island, evidence of which was uncovered when the foundations for the Round House on the island were being excavated in the eighteenth century,

Belle Isle was the subject of a minor seige during the English Civil War, Robert Phillipson, a local Royalist officer, was besieged by the Roundheads lead by Colonel Briggs, who fired cannon at the island from Cockshott Point, but his brother conducted a timely rescue. Burning with resentment at Briggs, Phillipson wildly rode his horse, sword in hand, into Kendal Parish Church and attempted to abduct Briggs during the course of the service. He was chased out by the outraged and indignant congregation. Leaving in haste, Robert left his sword and helmet behind, which can still be seen on display at Kendal Parish Church church today.

Belle Isle Roundhouse, a Grade I listed building, dates to 1774 and was buit for an influential Nottingham merchant, Thomas English, at a cost of £5,000. Wordsworth disliked the building and scathingly referred to it as a 'pepper pot' in 'the Prelude'. The unusual circular edifice, which can be glimpsed from the shore at Cockshott Point, was designed by John Plaw and inspired by the Villa Vicenza in Rome. It boasts a dome and an elegant four column portico. The house underwent extensive restoration after a disastrous fire occured there in December, 1996.

The island was once owned by the Curwen family, friends of Wordsworth, who purchased it from Thomas English in 1781 for £1,720. Formerly known as Long Holme and later Great Island, the island was renamed in the late eighteenth century in honour of Isabella Curwen. The descendants of Isabella and her husband John Christian Curwen lived on the island until as late as 1993. Unlike the other islands on the lake, the attractive planting on Belle Isle, magnificent in the Autumn, is largely man made and part of an arboretum.

Belle Isle is privately owned and not open to the public.