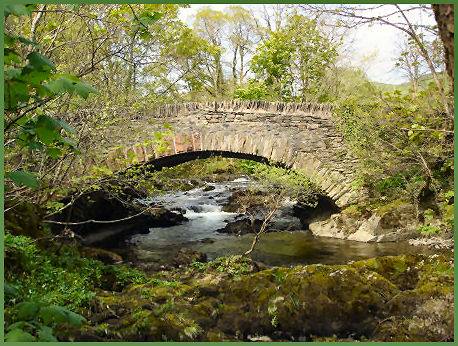 The highly scenic Kentmere Valley lies to the east of Lake Windermere.

The picturesque, narrow valley is entered by road from the south and is surrounded by a horseshoe of high fells.

The scenery in the valley is gentle to the south of Kentmere village and consists of rolling hills and lush verdant meadows.

To the north it deepens into a classic U-shaped Lakeland valley with steep rugged slopes leading to the high summits of a bowl of fells known as the Kentmere Round, which surround bleak Kentmere Reservoir.

Ill Bell has a distinctive shaped summit and climbers are well rewarded with panoramic sweeping views reaching across Lake Windermere to the west, which on a clear day stretch as far as the huge tidal waste of Morecambe Bay. 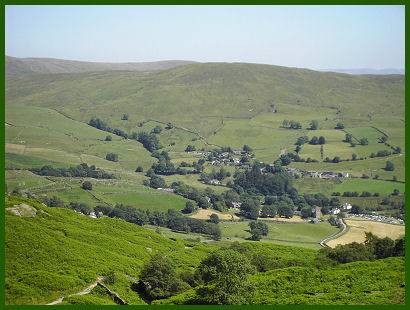 The valley lies sandwiched between the Troutbeck Valley to the west and Longsleddale to the east. The only access by road is to travel through the large Lakeland village of Staveley, which is situated to the south.

Kentmere village stands at the head of the dale, it is a small, scattered settlement, but nonetheless attractive. Kentmere Hall in the village began life as a Medieval pele tower and dates from the fourteenth century.

St. Cuthbert's Church at Kentmere was largely rebuilt in 1866, but boasts far older roof beams which date from the sixteenth century and has a memorial plaque to the Protestant reformer Bernard Gilpin (1517-1583), a native of the village. He narrowly escaped being burned at the stake during the reign of the Catholic Queen Mary I, known as 'Bloody Mary'. He had been arrested and was facing heresy charges, when on the journey to London to answer his accuser, the notorious Bishop Bonner, he broke his leg, which created delays and he was saved by Mary's own death on on 17 November, 1558, which occured before he recovered.

Standing near to Kentmere Hall is The Brock Stone, also known as Badger Rock, a large free-standing rhyolite boulder, which presents a challenge to climbers.

The road through the dale terminates at the village, where there is a public car park. From there paths radiate westward over the fells to the historic village of Troutbeck, north to Kentmere Reservoir and east into neighbouring Longsleddale.

Kentmere Studio Pottery is located in a building which dates back to the thirteenth century and was once a watermill. The Pottery produces handmade ceramics of excellent quality which are all painted and finished by hand. They specialise in tableware, lamps and individual pieces.

The Kentmere Valley reveals evidence of human habitation going back to roughly 4000 BC, when it would have been thickly forested.

There are traces of Bronze age settlement at Tongue House, Hugill and at Millrigs. That at Hugills is marked by a low embankment surrounding an irregular pattern of streets, the foundations of which which may still be discened.

The Romans built High Street, a major highway north along the fells that make up the west of the Kentmere valley. The road bestows its name on the mountain that looms above Kentmere Reservoir. The deep and narrow wooded valley provided a perfect hiding place for hostile native Britons and the Romans preferred to keep to the high fells where they constructed High Street, which served as a major highway north along the fells lying west of the Kentmere valley and leading northwards towards the border with Scotland.

An archealogical excavation at Kentmere Tarn uncovered two Viking boats, one of which is currently on display at Kendal Museum.

A walk in the Kentmere Valley via Kentmere Reservoir

Length:- six and a half miles

*Commencing at Kentmere Church (OS Grid ref- NY458041), follow the road to Nook House, at the foot of the pass, keeping on the lane in the direction of the head of the valley, passing through a gate and over a cattle grid.

*Leave the lane at Hartrigg, taking the left track through a gate. Continue along the track, crossing a stream, keep to the left of the stream and follow the main path to Kentmere Reservoir. Cross the dam and ascend the slope via a grassy rake to the right, joining the Nan Bield Track which meets the route to the right of the rocky knoll visible from the dam.

*Turn right at the junction and continue along the path, turn when descending to a wall with a gate in the corner leading to a stream crossing. Continue along this path to Overend Farm. Turn left onto the road, passing the farm buildings to a gate leading to a bridleway which offers superb views of the valley.

*The track rejoins the road, follow the road down to the second junction. Turn right and follow the lane to the bridge over the River Kent. At this point turn right to return to Kentmere Church.