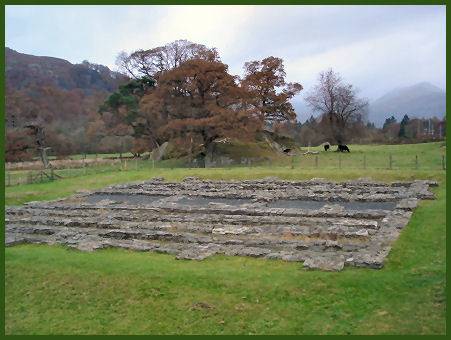 Galava Roman Fort, which stands at Borrans Head, Waterhead, Ambleside, was was built around 79A.D., as one of a series of fortified structures constructed to defend Roman trade routes across Cumbria. The fort stands on land owned by the National Trust and is maintained by English Heritage.

The first fort to occupy the site was erected of timber in the latter part of the first century to house a garrison of around 200 troops. The timber fort was later abandoned by the Romans.

In the early part of the second century A.D., during the time of General Agricola, it was replaced by a stone fort on the site. This stood on an artificial platform, the remains of which are still just about visible today. It housed a cohort of 500 infantrymen. It consists of an oblong enclosure measuring 300 x 120 feet and was held until around 365 A.D..

The remains of the fort's defences, and parts of the internal building arrangement, including the main gate, the south gate, the commanding officer's house, the headquarters building and the granaries, were excavated between 1914 and 1920 by the archaeologist R.G. Collingwood of Pembroke College, Oxford.

The main entrance to the fort was through its eastern gateway, a road- the Via Praetoria, ran through it to the headquarters building, the gate once had double portals with gate towers. The fort possessed four gateways in all with each standing on one its four sides. 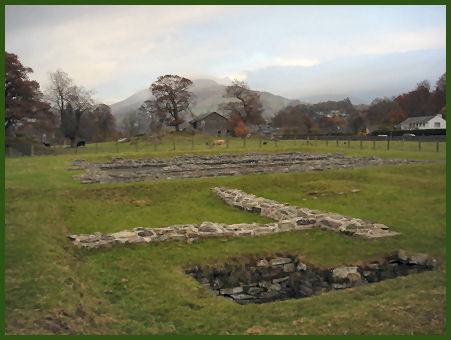 The large South Gate or Porta Principalis, once had a single portal and high flanking walls. The outer threshold stone is still visible today, in which the large pivot holes, on which swung massive wooden doors, may still be discerned. Through these doors ran the Via Principalis, the road leading down to the edge of Lake Windermere. The Romans are likely to have used the lake for transporting men and materials from the south. The fort's defences consisted of two external ditches and a stone wall, which was about 1.2 metres (4 feet) in height.

The Commanding Officer's house at the fort, known as the Praetorium, was a large building with at least twelve small rooms built around a centrally placed open courtyard. The Principia, or Headquarters building was the most important structure within the fort and occupied a central position at the junction of the two main roads. It was designed around a small, open courtyard surrounded on three sides by a verandah, on the fourth side stood a hall which ran the full length of the building. At the northern end of the hall, the remains of the tribunal, from which the commanding officer would have issued orders, can still be seen.

The Horrea, or Granaries at Galava, consisted of two butressed buildings, which were seperated by a narrow yard. The fort was laid out in a typical Roman 'playing card' shape, with rounded corners. At each of the corners stood a tower which rose above the defensive wall. The towers provided access to a wall walk which ran the length of the wall.

A gravestone discovered near the site commemorates Flavius Romanus, a records clerk at the fort who was 'killed inside the fort by the enemy'. Finds at the site included coins of Faustina Iunior, Iulia Domna, and Valens, Samian of about A.D. 80 and later, including one or two bits of German Samian, a silver spoon, some glass, iron, and bronze objects, a leaden basin, and seven more leaden sling-bullets. Artefacts from the fort can be viewed at the Kendal Museum of Natural History and Archaeology.

The bathouse at Ravenglass