Hadrian's Wall is one of the most visited tourist attractions in the whole of the United Kingdom, and stretches the width of the country from the North Sea to the Irish Sea for 73 miles (117km) from Wallsend-on-Tyne in the east to Bowness on the Solway Firth on the west coast. 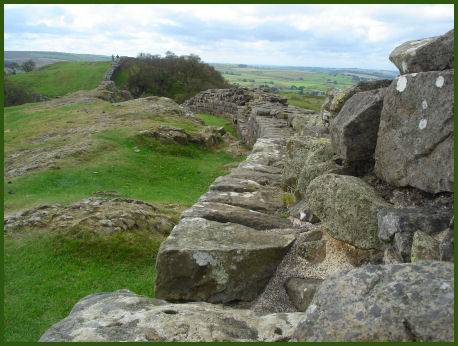 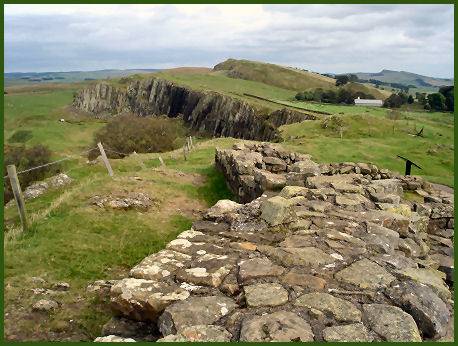 The wall was constructed by the Emperor Hadrian (76 - 138A.D.) as a defence against the warlike Pictish tribes of Scotland and marks the northern boundary of the Roman Empire, it was built following a visit to Britain by the emperor in 122 A.D. and remains today a fitting memorial to an Emperor distinguished for his architectural ambitions.

Construction probably commenced on the wall in 122 A.D. and was largely completed within eight years. The work was carried out by the Second, Sixth and Twentieth legions, normally based in York, Chester and Caerleon. The wall was not patrolled by soldiers from Rome, but by second line troops called auxiliaries, these soldiers were recruited from the continent and were well trained. They would have come from as far afield as Africa and Asia as well as Europe, with some British recruits also stationed there.

Running for forty-five miles from the east, Hadrian's Wall was constructed of stone and turf. The stone wall had two outer faces of dressed stone, containing a centre of rubble. The remaining thirty-one miles of the Wall in the west was built of turf. The turf wall, constructed from turf blocks, was built either from the prepared ground or upon a bed of cobbles. There was a large ditch with attendant earthworks to the south, called the Vallum. A communication road was built behind the wall, known as the Stangate, with roads providing access to it.

The height of the wall varies according to location, east of the River Irthing it is constructed from squared stone and measured 3 metres (9.7  feet wide and 5 to 6 metres (16-20 feet) tall; west of the river the wall was made from turf and measured 6 metres (20 feet) wide and 3.5 metres (11.5 feet) high. Hadrian's Wall was so strong that it never fell before a Pictish attack.

Milecastles were placed at regular mile intervals along the length of the wall, each housing garrisons of up to 60 men, with towers every third of a mile, to enable watching and patrolling. Hadrian's wall served administrative as well as defensive functions, it controlled trade and customs. To the north lay the further defence of the Antonine Wall, built of earth, it stretches from the Firth of Forth to the Clyde. 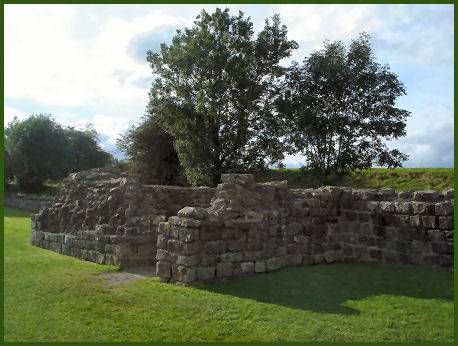 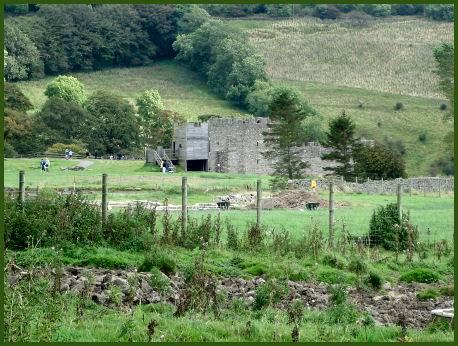 Vindolanda Roman Fort, (OS grid ref:-NY7766) sometimes known as Chesterholm, lies in a sheltered valley, 2 miles south of the wall. The fort has undergone many years of excavation uncovering a large extent of the civilian settlement, known as the vicus and a number of well preserved artifacts. Photographs of rare ink on wood documents enable the visitor read letters written nearly two thousand years ago. In the museum gardens are full sized reconstructions of a Roman temple, a Roman shop, Roman house and Northumbrian croft with audio presentations. Visitor facilities include an souvenir and book shop, Café Lepidina, Quiz trails, scenic picnic areas and toilets.

The Roman Army Museum (Carvoran) provides an insight into the daily life of Roman soldiers and offers an Eagle's Eye virtual reality tour of the wall. The museum is located 1km north east of Greenhead.

Housesteads Roman Fort known as Vercovicium to the Romans, is the most complete Roman Fort in Britain, located halfway along the wall in Northumberland (OS grid reference NY790688) The fort includes granaries, barracks, a hospital and even a multi-seated latrine. There is also a museum on the site , with displays illustrating how Housesteads once appeared. 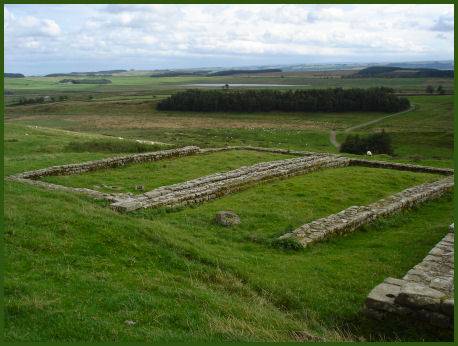 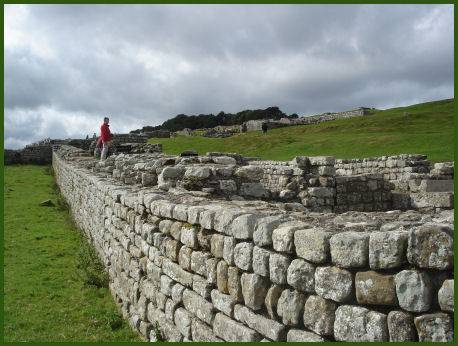 Chesters Roman Fort and Museum, west of Chollerford, has the best visible remains of a Roman Cavalry Fort, together with a military bath house and museum.

The Temple of Mithras which is situated near Carrawburgh fort (OS grid ref:- NY858712) was dedicated to the Roman sun god, beloved by Roman soldiers, and contains facsimiles of altars found in the course of excavation. The temple was founded in the 3rd century, and eventually desecrated, probably by Christians.

Along the wall can be found many carvings and engravings left by the Roman legionaires and their followers whilst they were stationed on the Wall, countless monuments with their Latin inscriptions relate the names of the Romans who once served there. Fragmentary shrines and altars to the Roman and Celtic gods have also survived

The wall at Housesteads 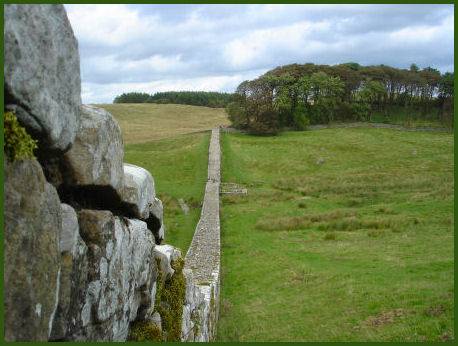 A significant portion of the wall survives to the present day, particularly in the mid-section, although whole sections of it were demolished in the eighteenth century for road making. For much of its length the wall can be traversed by the visitor on foot and many of the fascinating excavated forts are open to the public. Some of the best places to see the wall itself are at Birdoswald, Willowford, Walltown Crags, Cawfields, Hotbank Crags, Steel Rigg, Housesteads or Sewingshield Crags.

Hadrian's Wall was appointed a UNESCO World Heritage Site in 1987 and currently recieves around 1.25 million visitors per year. The Hadrian's Wall Path National Trail stretches for 84 miles, coast to coast, along the length of the wall. The Hadrian's Cycle Way was opened in 2006, and encompasses diverse terrain from strenuous hills to country lanes.

Birdoswald Roman Fort, known as Banna to the Romans, one of the sixteen forts situated along the length of Hadrian's Wall, is an impressive site. The fort stands in one of the most picturesque settings along the whole of the wall, overlooking the River Irthing. A Roman fort, turret and milecastle can all be seen along this section of the Wall. 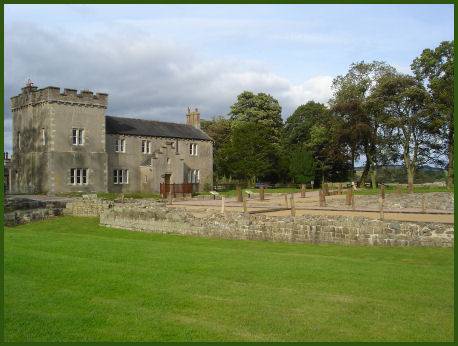 The fort was occupied from approximately AD 112 AD to 400, and it is the only site on Hadrian's Wall at which significant occupation in the post-Roman period has been proven.

Chester Roman Ampitheatre-the largest yet excavated in the whole of the British Isles..

Medieval Castles The Welsh castles of King Edward I

The Tower of London- the symbol of England's national heritage, founded by William the Conqueror