Carlisle Castle sits on a grassy hill above the confluence of the rivers Eden and Caldew. The castle, which is over 900 years old, is approached along a cobbled way guarded by a gatehouse which still retains its portcullis. 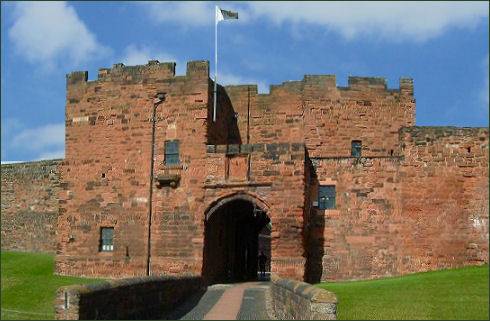 The castle now serves as the headquarters of the King's Own Border Regiment and contains the regiment's museum. Buildings known as Arnhem, Ypres, Gallipoli, and others named after the regiments various campaigns flank the central courtyard. Visitors can explore its ancient chambers, stairways and dungeons.

Carlisle Castle boasts a long and colourful history, it was founded by King Willliam II, known as Rufus, the third son of William the Conqueror. At that time, Cumberland was still a part of Scotland. During a campaign in the north to drive out Dolfin, son of Earl Gospatrick of Northumbria, William built the first timber castle on the site in 1092.

Thirty years later his brother, King Henry I, repaced the castle in stone, adding the keep at the north east corner of the Inner Bailey, which is now the oldest part of the castle. In one room of the Keep, remnants of a large fourteenth century fireplace can be seen. Henry II contributed to the fortress with a stone outer curtain, pierced by a new southern gate. 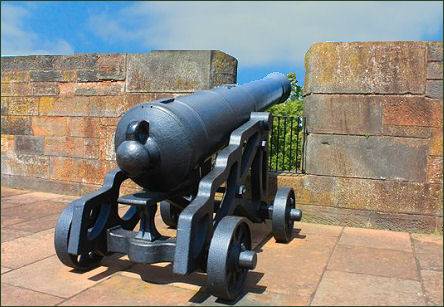 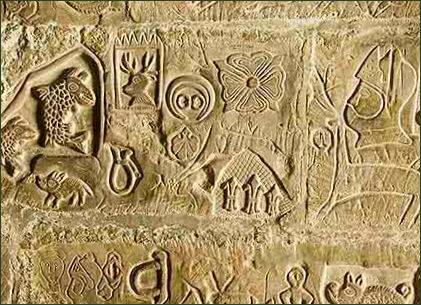 When, during the troubled reign of King Stephen, the castle fell into the hands of the Scots, its fortifications were strengthened by King David I of Scotland. The castle changed hands many times over the proceeding turbulent six hundred years of border feuding. On the 26 March 1296 John 'The Red' Comyn, Lord of Annandale, led a Scottish army which attacked Carlisle. The then governor of the castle, one Robert de Bruce, the former Lord of Annandale, led the defence of the city and forced the invaders to retreat back through Annandale to Sweetheart Abbey. From the mid thirteenth century until the unification of England and Scotland in 1603, Carlisle castle was the vital headquarters of the Western March, a buffer zone to protect the western portion of the Anglo-Scottish border.

The ill fated Mary, Queen of Scots was held prisoner in the castle in 1568, when she fled to England to solicit aid from her fellow Queen and cousin, Elizabeth I of England, to subdue the rebellious Scottish Protestant lords. Queen Mary's Tower, which is amongst the oldest buildings in the castle stands in the far north east corner of the Inner Bailey. Lady's Walk is also named after Queen Mary, as it was here that she used to take exercise during her captivity at Carlisle. She was to spend the rest of her life in captivity in England before being beheaded at Fotheringhay Castle in 1586.

Other buildings within the Inner Bailey include the Captain's Tower (or inner Gatehouse), which dates from the twelfth century and has heavy wooden doors, a portcullis and 'murder holes'. There are also the remains of the Royal apartments, the chapel and the Great Hall. 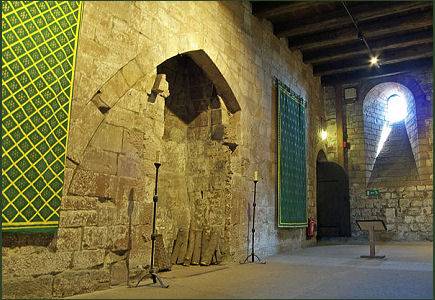 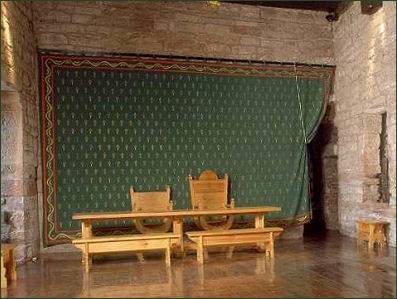 The castle fell to the Scots in 1645 and a century later, Mary Queen of Scot's descendant, the legendary Bonnie Prince Charlie, again captured the Carlisle Castle in his failed bid for the thrones of England and Scotland during the 1745 Jacobite Rebellion.

The Jacobite strategy was to split their army into a two-pronged advance into England which re-met by the walls of Carlisle. The town was placed under siege and capitulated to the Jacobites on 17th November. A garrison was left at Carlisle while Charles and his Highlanders marched into England, which was later to be utterly annihilated by the government forces. Jacobite prisoners, parched, resorted to extracting water from the 'Licking Stones', to find enough moisture to stay alive. The stones can still be seen in the castle dungeons. The Jacobite rebels were later brutally executed on Gallows Hill.

Many fascinating carvings adorn the walls of the second floor of the castle keep. These were once believed to have been the work of prisoners however recent research suggests they may have been done by prison guards near to the end of the fifteenth century.

Carlisle Castle is managed by English Heritage. Guided tours are available. Gift shop with a range of souvenirs with a medieval theme.