At Willowford Bridge, just to the west of the village of Gilsland stand the impressive remains of the eastern abutment which once carried Hadrian's Wall over the River Irthing. 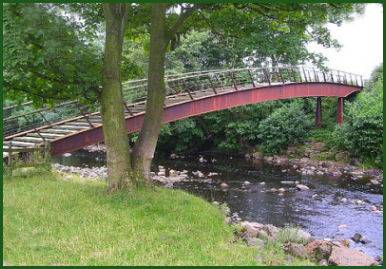 The course of the river has changed somewhat since Roman times. The east abutment of the Roman bridge has been left high and dry due to the westward movement of the river.

The bridge abutment is well preserved with informative interpretive boards showing how the bridge would have looked in Roman times. Three succesive bridges were built by the Romans to cross the river at this site. 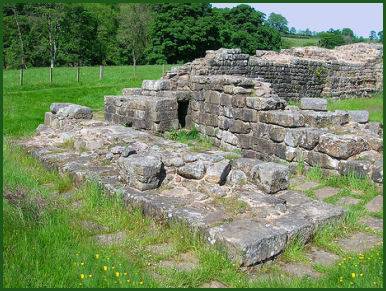 The first Roman bridge to occupy the site dated to 122 - 128 A.D when Hadrian's Wall was built, this bridge is believed to have collapsed around 160 -180 A.D. The second had a timber superstructure. The third bridge was wider and had three stone arches with a tower at each end.

The River Irthing forms the boundary between the counties of Northumberland and Cumbria. The Millenium Bridge, the elegant metal pedestrian bridge which now spans the Irthing just further downstream from the Roman Bridge was erected in 2001 with donations from the Heritage Lottery Fund. The bridge was lifted into position by helicopter.