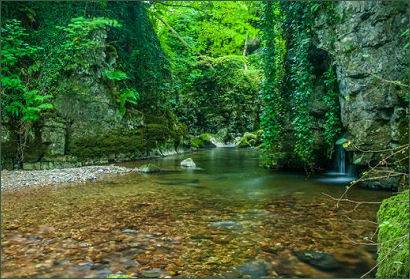 The impressive Howk Waterfall is situated in the Howk gorge, near to the pretty North Cumbrian villlage of Caldbeck known for its association with huntsman John Peel, who is buried in the churchyard. 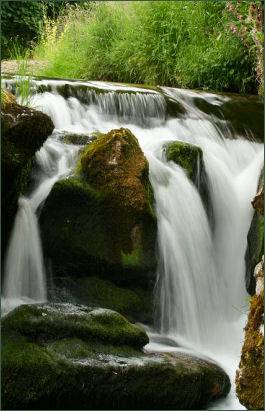 The waterfall is accessed via a ten to fifteen minute walk along a signposted riverside trail leading from Caldbeck village centre.

En route the visitor passes the remains of an old bobbin mill which once boasted the largest overshot wheel in the country, measuring 3 feet wide and with a 42 feet diameter. The mill began production in 1857 and made mostly spinning and threading bobbins for the cotton industry. Wood for the bobbins came from areas of ancient coppiced woodland in the valley and surrounding area. Raw materials and finished products would have been transported to and from the site by horse and cart.

Caldbeck derives its name from the river Cold Beck, which provided water power for important industry in the seventeenth and eighteenth centuries. Mills producing flour, wool, bobbins and paper, along with a brewery, all used the river and its tributaries for energy.

Just beyond the mill, the river narrows to form The Howk Gorge. The vegetation in the gorge is typical of a limestone woodland and includes rare ferns such as the Shield fern.