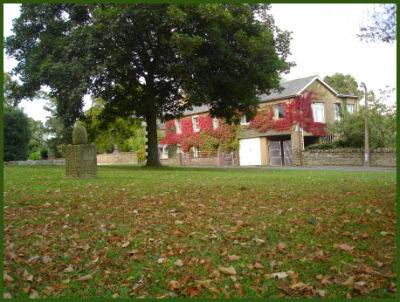 The pleasant North Cumbrian village of Wreay is situated on the Petteril river around five miles south of Carlisle.

The name Wreay ( which is pronounced Ree-a) derives from the Old Norse word vrá which means a 'secluded nook or corner of land', the spelling of the name has undergone variations over the centuries ranging from Wrey, Wrea, and Wray to Petrill Wrey.

A large aquifer below the villlage has been used since the Roman era and dictated the location of the crossroads which the village eventually grew up around. Excavations in the churchyard of the village church revealed a tiled watercourse which incredibly flows all the way to Carlisle Cathedral. St. Ninian, while passing through Carlisle, remarked with wonder on the fountains, the source of these was the water at Wreay.

The water pump, which stands on the pleasant village green near the church, is a relatively recent addition, it was placed there in 1988 by the residents of the village.

One of the unusual aspects of village life in Wreay are twelve self electing men known as the 'Twelve Men'. They sit once a year, in a local public house, and discuss the welfare of the village.

The village pub, the Plough Inn, has undergone an extensive refurbishment and serves excellent meals. 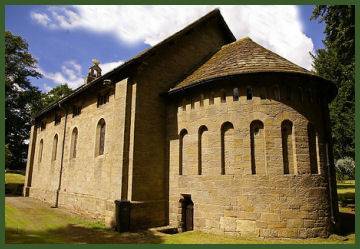 The highly original Italianate style village church, St. Mary's at Wreay was built between 1840 and 1842.

The church was designed by Miss Sarah Losh (1785-1853) of Arlosh Hall, who received inspiration from buildings she had visited when on tour on the continent.

Sarah Losh was described by Simon Jenkins as a 'Charlotte Bronte of wood and stone', he placed St. Mary's church in the top ten of the 1,000 English churches covered in his book on the subject.

Sarah Losh was also responsible for the restoration of St. John's church at Newton Arlosh.

Sarah was the gifted daughter of John Losh, a Tyneside businessman who in 1809, along with his brother William, founded the Walker Iron Works.

Her wealthy father provided her with an excellent education and in 1815, accompanied by her sister, Katharine, she embarked on the 'Grand Tour' of France, Germany and Italy where her ardent interest in architecture was kindled. Outside the church stands a mausoleum to Sarah's sister, Katherine, who died in 1835, and from whose death she was said to have never totally recovered. 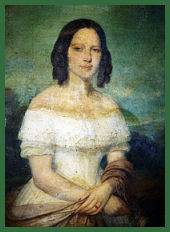 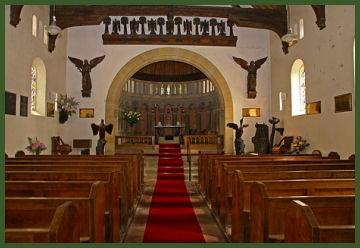 The church is rectangular in shape with a semicircular apse with fourteen pillars, which echoes the shape of a Roman basilica. The beautiful alabaster font, carved by Sarah herself, is adorned with a myriad of carved images.

Acorns and pine cones (the symbol of eternal life) are a constant repeated feature of the decoration, and the mosaic stained glass windows are very striking.

A replica of the Bewcastle Cross stands in the churchyard.

The church recieved a visit from Prince Charles in 2002.

The replica of the Bewcastle Cross at Wreay 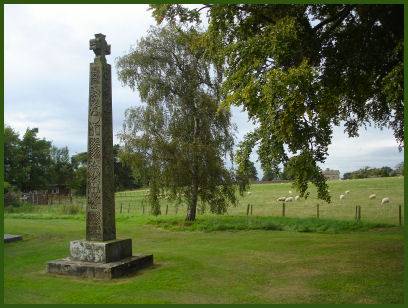 A footpath from Wreay leads to Wreay Woods Nature Reserve ( NY 445 497), which follows the course of a red sandstone gorge of the River Petterill. The reserve is owned by Carlisle City Council but is managed by the Cumbria Wildlife Trust. It is a semi-natural ancient woodland of mainly native broadleaved trees. The river bank is mostly alder and in spring is covered with a bright carpet of wild flowers. A variety of bird species inhabit the reserve, including blackcap and long-tailed tit, dipper, grey wagtail and kingfishers. Red squirrel and roe deer may also be sighted. A riverside footpath runs through the woods and continues up to Carlisle.

Around half a mile from Wreay stand the remains of a 1.3 ha Roman fort ( NY4449) on the banks of the river Petteril. The fort lies around half a mile North East of the village, at Park House Farm.