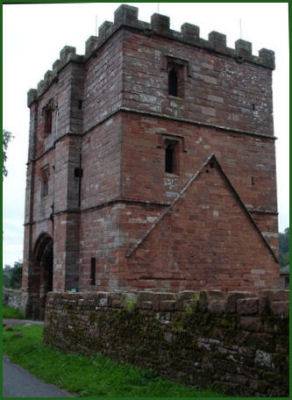 Benedictine Wetheral Priory was founded in 1106 by Ranulph de Meschines and dedicated to the Holy Trinity, St Mary, and St Constantine.

The solitary Gatehouse, all that now remains of the once grand medieval priory at Wetheral, is situated around six miles east of Carlisle. The building stands at the edge of the village of Wetheral on the B6283 road.

The battlemented gatehouse itself dates from the fifteenth century, and is built in course red sandstone, the arched gateway was once the entrance into the outer court of the monastery. In medieval times it formed part of a complex of buildings, which included a chapel, monastic offices and a school.

The three storey high gatehouse consists of two domestic chambers located on each of its two upper floors above the entrance arch, which are accessed via a spiral staircase. The spacious chamber on the first floor is equiped with a fireplace, garderobe and two small inner chambers. The chamber on the second floor is of similar layout.

The gatehouse survived destruction at the Dissolution of the Monasteries under King Henry due to the fact that it then served as the vicarage for the local church. It was sold by the Lord Protector Oliver Cromwell during the commonwealth period, but was recovered following the restoration of King Charles II.

The monks of Wetheral once used nearby St. Constantine's cells as a place of refuge during border warfare. Legend records that the cells, which are cut into the rock around 40 feet above the River Eden, were carved by Constantine, son of a King of Scotland.


Abbeys and Churches in Cumbria