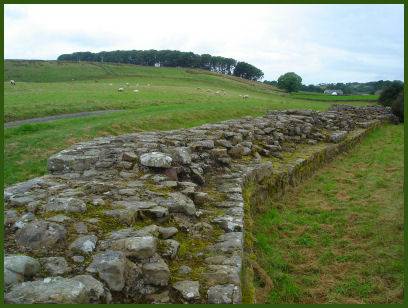 The small isolated village of Gilsland is situated on Hadrian's Wall and stands on the borders of Cumbria and Northumberland which is here defined by the River Irthing and its tributary the Poltross Burn. 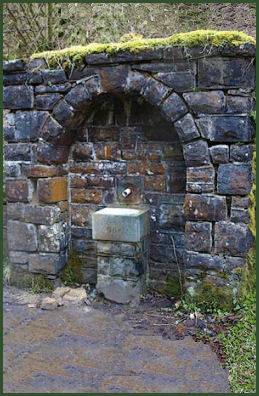 Gilsland Spa (pictured right) stands nearby, famous in the past for its sulphurous spa waters, where people flocked for centuries to take the waters. The Gilsland Spa Hotel, an ideal base for exploring Hadrian's Wall Country, stands in superb scenery.

In its extensive grounds can be found the 'Popping Stone', a group of three rounded sandstone boullders, of disputed antiquity. The larger stone is about 2.7m long, 1.3m high and 1.4m wide and the two smaller stones are about 70cm and 85cm in length. Said to possess magical qualities, name is said to derive from the Old English word popelstan , meaning "pebble-stone". It is the site were Sir Walter Scott proposed to Charlotte Carpenter in 1797.

The village church St. Mary Magdalene, was errected by George Gill Mounsey, who also responsible for building the hotel. Gilsland Station, formerly known as Rosehill, stands on the Newcastle and Carlisle section of the North Eastern railway.

One of the best preserved milecastles along Hadrian's Wall, is Milecastle 48 at Poltross Burn otherwise known as 'The King's Stables' at Gilsland, the milecastle stands on a steep slope and has a playing card shape with the fortlet's rounded corners and the foundations of the accommodation buildings in its inner yard are clearly discernable.

Nearby Willowford Bridge carried Hadrian's Wall across the River Irthing. The east abutment of the Roman bridge has been left high and dry due to the westward movement of the river. Nevertheless, the much-modified visible remains are highly impressive. The millenium Footbridge now spans the river allowing access to the remains.