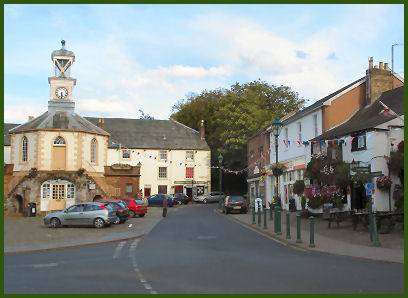 The well kept red sandstone market town of Brampton is situated in North-east Cumbria, just south of Hadrian's Wall and lying 14km east of Carlisle the town makes an ideal base for exploring North Cumbria and Hadrian's Wall Country.

Brampton's half cobbled and characterful main street runs up to the market place and the octagonal Moot Hall with its clock tower and exterior staircase to the upper entrance, the building dates to 1817 and was built by the Earl of Carlisle, it now serves as the town's tourist information centre.

Bonnie Prince Charlie spent a night at Brampton, in the course of marching his army south during the ill fated 1745 Jacobite uprising, the fact is now commemorated on a plaque on the wall of a shop on High Street Cross. The shop dates to 1602 and is the oldest building in the town. It was the site were Bonnie Prince Charlie recieved the keys of Carlisle following the surrender of the city to the Jacobites. A French sword and bonnet were later discovered in the Half Moon Inn, they were said to be owned by the French ambassador in the Prince's entourage. The sword and bonnet are now housed at the Tullie House Museum in Carlisle. 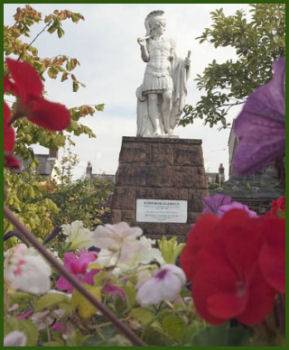 Six of the prince's supporters, who were left to hold a garrison at Carlisle, after his retreat to Scotland, were later hanged outside the town by the Duke of Cumberland, later named 'Butcher Cumberland' on account of his brutality. The site is marked today by the Capon Tree Monument.

The main church in Brampton is the red sandstone St.Martin's Church which was built between 1874-8. Edward Burne-Jones (1833-1898) designed some the impressive stained glass windows which were made by the William Morris studio. The church was designed by the pre-Raphaelite architect Philip Webb. Sir Nikolaus Pevsner described the church as : 'a remarkable building'.'the windows glowing with gem-stone colours'.

A modern statue to the Emperor Hadrian stands outside St. Martin's Church, placed there by the Brampton Chamber of Trade.

Brampton has rows of old cotton weavers cottages, weaving was once a thriving industry in the town. The White Lion and the Scotch Arms pubs date back to the eighteenth century. The Scotch Arms was once an old coaching inn.

East of the town stands an extremely large motte, rising about 135 feet high which is surmounted by an imposing statue statue of George William Frederick Howard, the 7th Earl of Carlisle. The mound is possibly the site of an old castle. 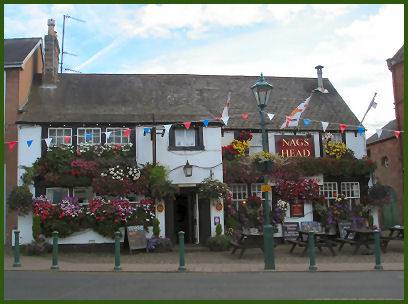 Attractive Rickerby Park, which stands on the banks of the River Eden, is a traditional Victorian Park.

Gelt Woods lie approximately two miles south of Brampton, crossed by the River Gelt, a tributary of the River Irthing, the woods offer charming walks and are particularly beautiful when clad in Autumn colours. They contain an RSPB nature reserve and are home to red squirrels. A rock carved by a Roman soldier is to be found in the woods. The inscription dates from 207 AD and known as "the written rock of Gelt".

Two miles east of the town, on the B6413 Castle Carrock road, lies Talkin Tarn Country Park. The attractive tarn, a kettle hole lake which was formed by glacial action, measures 1.3 miles in circumference and is set amidst 120 acres of woodland and farmland which is rich in wildlife, including deer and red squirrels. The annual rowing regatta attracts oarsmen from all over the North of England. The boathouse contains tea rooms and there is also a gift shop.

Brampton boasts a history dating back to the seventh century, its name is said to derive from the Old English 'brambles', meaning thorny bushes. Brampton was granted its market charter by King Henry III in 1252. A country market is still held on Wednesdays, which takes place in and around the Moot Hall.

Two miles east of Brampton stands the picturesque Lanercost Priory which was founded in 1166 by King Henry II.

Bonnie Prince Charlie a biography of the Stuart Prince