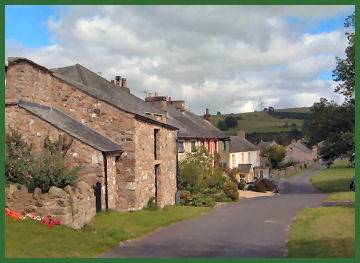 The unspoilt north Cumbrian village of Hesket Newmarket nestles in the Caldbeck Fells, on the west side of the river Caldew, in a popular walking area.

The villages name, like so many place names in Cumbria, derives from an Old Norse language, the word, eski, meaning a place overgrown with ash trees, in this case it is combined with the Anglo-Saxon word heafod, meaning hill, the Newmarket having been added on at a later date. 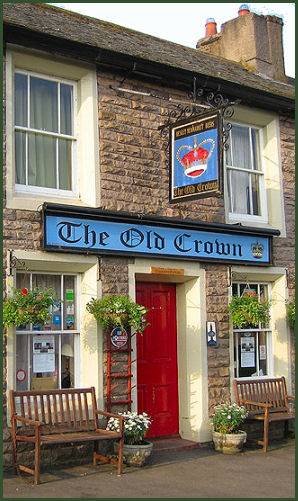 An old market cross stands on the huge and pleasant swarth of the village green, on which is kept a relic set of stocks.

Hesket Newmarket has a shop come post office, which has tearooms and a pub, the Old Crown, (pictured right) which dates to the eighteenth century and was Britain's first co-operatively owned pub. The Old Crown's microbrewery, located at the top of the pubs garden, make it a popular place with real ale enthusiasts. The beers are CAMRA award winners. The pub also serves good meals.

The Victorian author Charles Dickens once visited the village, in company with Wilkie Collins, Dickens stayed there in 1857 to gather material for an article, The Lazy Tour of Two Idle Apprentices, which he planned to publish in his magazine, 'Household Words'. Dickens later wrote an account of the village inn, relating how Joseph Porter "with his ruddy cheek, a bright eye, a well knit frame, an immense hand, a cheery voice and a straight bright look" showed them to his best room upstairs. A building named 'Dickens House' stands behind the market cross and comemoprates the author's visit.

Heskett Hall dates from around 1630 and was built by by Sir Wilfrid Lawson of Isel Hall, who was a member of parliament . for the town of Cockermouth. The hall is an interesting and characterful building, which boasts gabled wings, mullioned bays, swagged urns and finials. Its central chimney protrudes from a pyramidal roof.

Wild ponies can be seen grazing on nearby Caldeck Common.

Standing at Gillfoot, about three quarters of a mile from Hesket Newmarket, is Druid's Grove, a relic of ancient Britons. The grove consists of two parallel rows of large oak trees, beneath which the ancient druids performed their mystical religious ceremonies.


A walk in the Caldbeck Fells from Hesket Newmarket

*From the village car park, turn left, proceeding through the village with the Market Cross to your right, passing the Temperance Hall and Beech Cottage. Turn left to Woodhall, ascending the steps on the left which lead up a slope to a stile.

*Continue ahead with a fence and stream to your left and proceed to the next stile and carry on upwards to a further stile which lies to the right of a metal gate. Go on the stiled way passing through a gate to a track beside a wall which leads to the access road to Hudscales Farm.

*Bear left just before the farmhouse and follow the sign for the camping barn. Continue along the winding path to reach a gate leading onto the fell. Pass through the gate and bear left along the track, remaining parallel with the wall to your left. On reaching a wall ahead pass through the right of two gates. Bear a little to the right to pass a stile over a fence. Pass over a narrow stream and continue right to cross a ladderstile.

*Cross the small stream and bear slightly to the left, continue along the obvious path. Upon reaching the low spoil heaps of earlier mining in the area, turn off right to wards the two derelict buildings to follow the clear path. Proceed along the high level way with its magnificent views of the Solway. Where the path divides take the lower level and proceed to a wide track which comes up from the valley. Turn right at this point and follow the track down to the hamlet of Nether Row.

*Go through a gate and pass Clay Bottom Farm. Continue along the lane and where it makes a turn to the left take the signposted footpath on the right, pass a barn and cross the access road to Hudscales. Cross a stile onto a hedged path and continue to cross another stile into a field. Proceed across the field towards Street Head Farm and cross a stile onto a walled track. Cross a further stile and turn left to join The Street at Hesket Newmarket.