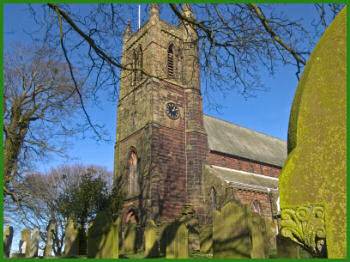 The Cumbrian market town of Aspatria lies a few miles north of the boundary of the Lake District National Park and is situated between Maryport and Wigton and eighteen miles southwest of Carlisle. The town has a total population of around 3,000.

The parish church of St. Kentigern is a handsome and spacious red sandstone building, was constructed in 1848 and occupies the site of an earlier church which dated to Norman times. Many interesting architectural features of the original church have been preserved, including a Norman arch over a doorway and a medieval font. The church also boasts some handsome stained glass windows.

St. Kentigern's houses a number of ancient relics, including some Anglo-Danish fragments, including the hogback fragment, which consists of about half of the original monument and a copy of the Gosforth Cross. An incised tomb slab decorated with a swastika was found on the site, which has been dated to around 430B.C. Just within the church door is a set of three slate tablets recording the names of vicars back until 1174. The churchyard has a holy well reputed to have been used by St Kentigern himself.

In the churchyard lies the grave of Sir Wilfred Lawson (1829-1906) teetotalller and parliamentarian, who lived at nearby Brayton Hall. He was responsible for a veto bill in 1864, proposing that pubs in any area should close when two thirds of the inhabitants appointed. The bill was rejected by a large majority, but Lawson continued to push his views on temperance in parliament. A memorial fountain in the town's market place was erected in honour of Sir Wilfred Lawson in 1908, it is inlaid with four bronze tablets.

Brayton Hall now stands in ruins, part of the grounds have been converted to a golf course. The third hole of the course is referred to as 'the Whisky Pond' and is said to be the spot where Sir Wilfred poured all the Whisky from Brayton Hall.

Beacon Hill, just north of the town, is the site of a sixth century burial barrow which was discovered in 1790. The barrow, which measured 90 feet in circumference, contained a skeleton, gold bucklet, gold ornament, dagger, parts of a battle axe and spur, and a inlaid silver sword.

Aspatria's unusual-sounding name means 'the place of St Patrick's ash', a reference to the early Celtic Christians who followed the Irish saint.