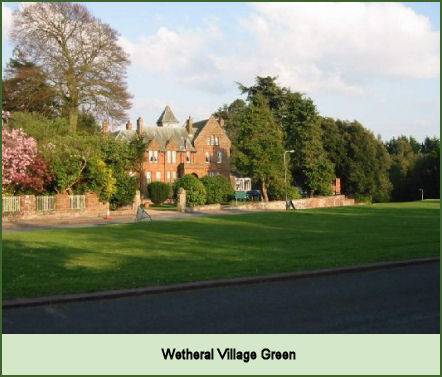 The attractive North Cumbrian village of Wetheral is situated around six miles to the east of Carlisle. The village is pleasantly situated high on a bank overlooking a gorge in the River Eden, one of England's finest salmon and trout rivers. 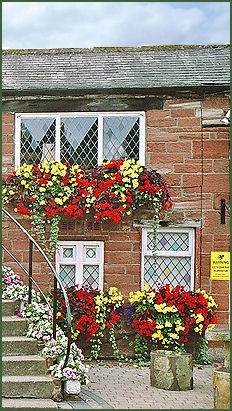 The village centres on its sizeable, triangular shaped village green, which is surrounded by Victorian and eighteenth century houses of the local sandstone and yellow brick, an hotel, restaurant and shops. the red sandstone Fantails restaurant, shop and tea room (pictured right) fronts the green

In one corner of the green stands the Wetheral Cross, once a market cross, which previously occupied a position at the centre of the green.

The handsome Early English style village church of the Holy Trinity, is built of the local red sandstone with an octagonal tower. The church stands in a commanding position overlooking the River Eden and is dedicated to the Holy Trinity. It was said to have once been dedicated to St Constantine, the only church in England with such a dedication. The building dates back to the sixteenth century and overlooks the river.

It contains a mausoleum to the Howard family of nearby Corby Castle, a life size sculpture by Joseph Nollekens of 'Faith' was commissioned by Henry Howard after the death, in childbirth, of his wife Maria. The cost of the sculpture was £1,500 in the late eighteenth century, which is estimated to be equivalent to nearly £2 million today.

The village occupies a bank which overlooks a gorge in the River Eden. Parts of the riverbank are surrounded by ancient woodlands, including Wetheral Woods, which are owned by the National Trust.

A train viaduct of five semi-circular arches, each spanning 80 feet, crosses the river Eden. Started in 1830, it was finished in 1834, and is a memorial to Henry Howard of Corby Castle.

Benedictine Wetheral Priory was founded in 1106 by Ranulph de Meschines and dedicated to the Holy Trinity, St Mary, and St Constantine.The solitary Gatehouse, is all all that now remains of the once grand medieval priory. The building stands at the edge of the village on the B6283 road and is now in the care of English Heritage. 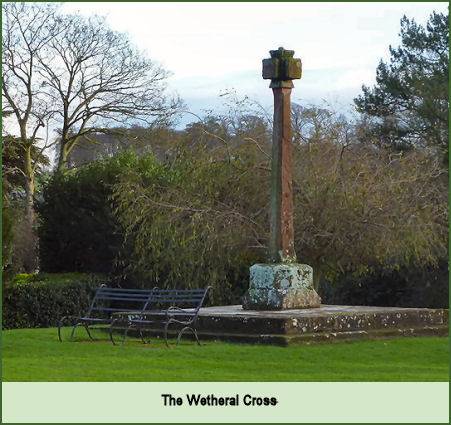 The battlemented gatehouse itself dates from the fifteenth century, and is built in course red sandstone, the arched gateway was once the entrance into the outer court of the monastery. In medieval times it formed part of a complex of buildings, which included a chapel, monastic offices and a school.

Near to Wetheral Priory are the man-made St. Constantine's Caves otherwise known as Wetheral Safeguards (pictured left) which are built, around fourty feet high, into the bank of the River Eden.

These sandstone caves were used by the monks of the priory as early as the fourteenth century, as places of safety in which to deposit their plate, vestments, and relics during incurrsions of Scots raiders, a common feature of life on the borders throughout the medieval period. Legend relates that the cells were made by St. Constantine, a younger son of a Scottish monarch, who is said to have lived as a hermit there.

A carved stone figure of St Constantine was placed opposite the cells in 1843. The caves may be explored. They are three caves altogether, deeply excavated, and protected by masonry, in which is a fire-place and three small lights. There is now a wooden gallery, by which they are rendered accessible. 25 metres to the south of the caves is a Roman inscription, which refers to the 20th legion Valeria Victrix.

Parts of the riverbank here are surrounded by ancient woodlands, including Wetheral Woods, which is owned by the National Trust. 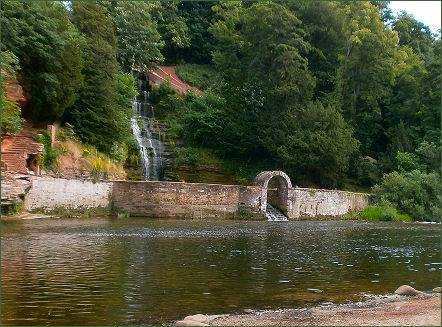 Corby Castle which stands across the river from the village, (OS grid reference NY 471 542) was once a tower house, dating back to the thirteenth century.

It was granted to Richard Salkeld in 1323, it was purchased from the Salkeld family in 1611 by Lord William Howard, the third son of Thomas Howard, 4th Duke of Norfolk. In 1630, Thomas Howard added a 2 storied L-shaped house onto the origonal pele tower.

The present neo-classical facade was built for Henry Howard by Peter Nicholson between 1812 and 1817. Corby Castle is reputed haunted by a ghost known as 'The Radiant Boy', the apparition supposedly wears only white and has shining golden hair.

Corby Castle has an early eighteenth century landscaped garden with cascades that run down to the river.

The castle is now owned by Northern Irish businessman Edward Haughey and is visible from the public footpath, on the west bank of the River Eden.


A walk at Wetheral

*Commencing at Wetheral village green, proceed towards the Priory Gatehouse,walk up the lane and take a left turn at a kissing gate, following the track to Wetheral Woods. After continuing along the track for around a quarter of a mile take the fork to the left. Keep to the left reaching a flight of stone steps leading down to St. Constantine's Cells.

* On returning back up from the cells, keep to the right and on reaching a merging of paths, keep right, going downhill.Emerge from the woods via a kissing gate, and remain on the path that follows the course of the River Eden. On reaching a grassy area, with Eden Benchmark sculpture turn left, going uphill for a short distance and then right, continuing along a narrow lane. Pass cottages to reach Wetheral Viaduct.

*Beneath the viaduct turn left up a flight of steps. Cross the railway footbridge at the station, and turn right to cross the viaduct on a footway. Follow a path to a level crossing with the Corby Bridge Inn opposite. Cross the railway then turn left on a footpath which after around 50 metres veers sharp right Continue along the path to Great Corby’s lower green below. Turn right at the road, turn right and continue along it to arrive at a crossroads by the Queen Inn.

* Take the right turn at the crossroads and continue along the road towards Carlisle until reaching the level crossing. After crossing the railway turn left to return across the viaduct. Cross the station footbridge and turn right uphill to return to Wetheral village green.