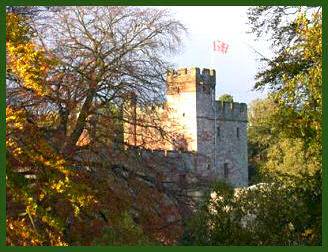 Imposing Naworth Castle lies two miles east of the market town of Brampton and stands adjacent to the A69.

The castle began life as a thirteenth century pele tower to protect against incurrsions by the Scots and was constructed by Ralph de Dacre, one of the Dacre Lords of Gilsland. The tower was later extended to form a border fortress. Living accommodation was added in the early sixteenth century by his descendant, Thomas, Lord Dacre of the North. The impressive first-floor hall was probably built by Thomas, Lord Dacre, in the early sixteenth century.  He lead the reserve forces at the Battle of Flodden and his arms are displayed over the detached entrance gateway. Thomas was awarded lands around Lanercost, after Flodden, which enabled him to extend Naworth.

Lord Dacre married Elizabeth de Greystoke and increased the family's estates.  However, on the death of George Dacre in 1560, the Dacre family became extinct in the male line and the castle and the Dacre estates passed by marriage to Thomas Howard, 4th Duke of Norfolk. Further additions were made in 1602, for Lord William Howard, third son of the Duke, who was executed by Elizabeth I in 1572, for his involvement in a plot to marry that ill fated seductress, Mary, Queen of Scots.

Lord William Howard married Elizabeth, daughter and heiress of Thomas, Lord Dacre. Along with his brother, Phillip, Earl of Arundel, he came under suspicion of treason and was imprisoned on three occasions in 1583, 1585 and 1589. He converted to Catholicism in 1584, both brothers being dispossessed by the queen of a portion of their Dacre estates, which were later restored in 1601.

Lord Howard then took up residence at Naworth, restoring the castle. He collected a valuable library, of which most of the printed works remain still at Naworth.

The building became sadly neglected over the centuries and in 1844 was gutted by fire. The building's present appearance is a result of the restoration by the famous architect, Anthony Salvin (1846 - 48).

Naworth Castle stands in attractive grounds which include a seventeenth century walled garden. The Castle is not open to the public but does cater for specific corporate events, weddings, private tours and can provide accommodation for special parties.