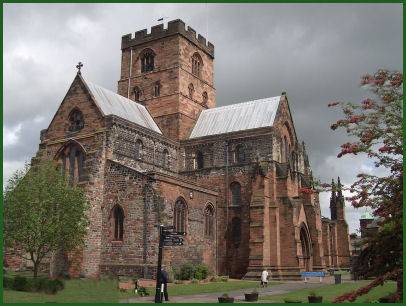 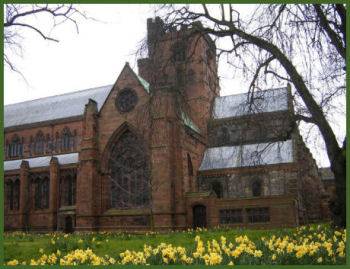 Carlisle Cathedral, Cumbria's only cathedral, bears the distinction of being the second smallest cathedral in England after Oxford Cathedral.

The cathedral is built of local red sandstone and was founded in 1122 in the reign of King Henry I. It was built by the first Bishop of Carlisle, the Saxon Æthelwulf (1133-1155).

The building replaced an earlier church on the site, which probably dated to the eighth century. It had been ravaged by Viking attacks and stood as a ruin until 1090, when King William II 'Rufus' ordered its reconstruction.

Some parts of Æthelwulf's original building still survive including the transepts and part of the nave. It existed at first as a priory, but in 1133 acquired cathedral status. The Cathedral was run by Augustinian Canons under Carlisle's first Bishop Adelulf of Nostell.

The eastern parts of the cathedral were rebuilt in the early thirteenth century and construction work began again in 1292 following damage in a diastrous fire that started in a neighbouring house.

In 1297 Carlisle Cathedral was the venue when Robert Bruce swore his allegiance to the English Crown in the church in front of his future nemesis King Edward I 'the Hammer of the Scots'. 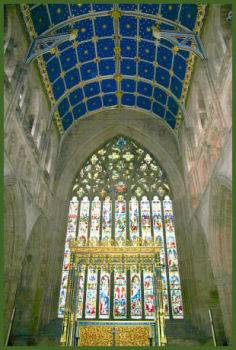 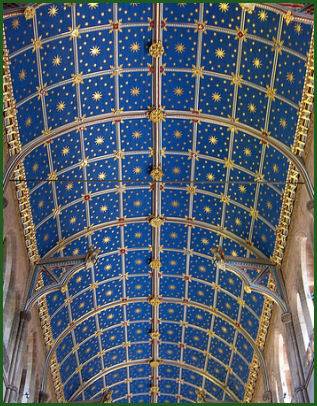 The cathedral has lost a large part of its original medieval nave, when during the Civil War, Parliamentary troops under General Leslie almost destroyed the nave, leaving only two bays standing.

The cathedral boasts a strikingly beautiful renovated barrel-vaulted painted ceiling in the choir, which dates to the fourteenth century, it is painted in vivid blue with gold trim and composed of thin wooden planks

Other features of interest include the huge Decorated style east window, the largest east window of any cathedral in Europe, measuring 48 x 30 feet. The window is one the finest examples of fourteenth century stained glass in the country and has superbly delicate tracery, it is believed to be the work of Ivo de Ragheton, who was also responsible for the west front of York Minster. Under the window is situated a 'piscina', where, before the Reformation, the priests washed their hands.

.In the north and south aisles can be seen medieval paintings depicting the Life of St. Cuthbert, St. Augustine and St. Antony and the figures of the twelve Apostles.

The early fifteenth century choir stalls and misericords are notable examples of medieval carving. The cathedral was restored by in the nineteenth century by Ewan Christian.

The treasury contains a display of Christian and Diocesan silver and treasure, illustrating the story of Christianity in Cumbria through the centuries. 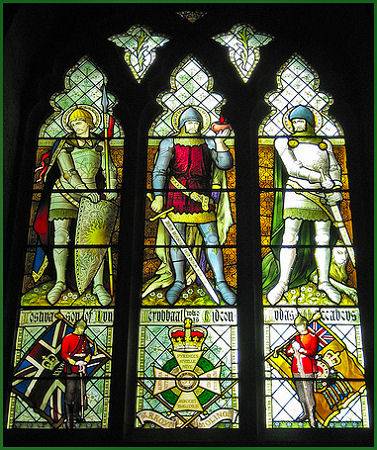 During the second major Jacobite Rebellion against the Hanoverian King George II in 1745 in support of the Catholic Stuart's claim to the crown, Bonnie Prince Charlie and the Highlanders mounted an invasion of England. The Jacobites siezed and fortified Carlisle and its castle. During the course of which the Cathedral was partly dismantled and the nave removed to use the stone to repair the city walls in preparation for a counterattack by the Hanoverian forces. When the government troops recaptured the city, the Jacobites were imprisoned inside the cathedral before facing torture and execution.

Also within the Cathedral is an exhibition on 'Christianity in Cumbria', which traces the long history of the Christian religion in the area, from the days of the earliest Celtic missionaries from Ireland.

The Fratery, which stands pposite the main entrance to the Cathedral, is a monastic building dating from the thirteenth century. It was rebuilt in the late fifteenth century by Prior Thomas Gondibour and now houses the Cathedral library. Inside the building there is an apartment reached by ascending three steps which is reputed to have been a confessional.

Other buildings of interest in the grounds, include the Deanery, with its fourteenth century Prior's Tower, which boasts a painted sixteenth Century heraldic ceiling.

Westminster Abbey - founded by the Saxon king, Edward the Confessor and consecrated in 1065.

Bangor Cathedral - one of the earliest monastic settlements in Britain, being founded by St. Deiniol in around the year 525