The Hadrian's Wall Long Distance Trail traverses the length of the Roman Wall, a World Heritage Site, from the North Sea to the Irish Sea for 84 miles (134.5 kilometers) across the length of Great Britain, from Wallsend-on-Tyne in the east to Bowness on the Solway Firth on the west coast.

The signposted trail was opened in May, 2003 and begins at Segedunum Fort, the most easterly military outpost on the wall, at Wallsend on Tyne and following the line of the Roman frontier, passes through the spectacular upland scenery of North Cumbria and the Northumberland National Park.


The trail covers most of the fascinating visitor attractions along the length of the wall including Birdoswald Roman Fort, which boasts the best preserved defences of any wall fort, Vindolanda Roman Fort, Housesteads Roman Fort , known as Vercovicium to the Romans, and the most complete Roman Fort in Britain, located halfway along the wall in Northumberland, the highly interesting Roman Army Museum at Carovan, Chesters Roman Fort and The Temple of Mithras, which is situated near Carrawburgh Fort and was dedicated to the Roman sun god. 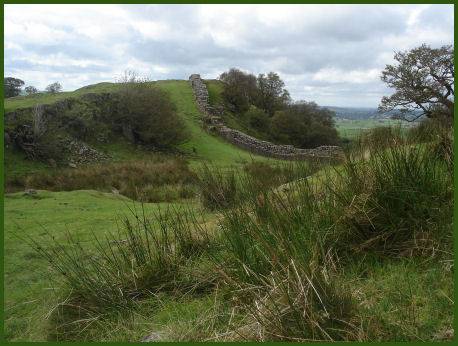 Though most of the Wall runs through remote and isolated countryside, lengthy sections pass through the vibrant cities of Newcastle and Carlisle.

Five youth hostels are located long the track. Due to the ever increasing popularity of the trail, and the lack of accommodation along the route, visitors are advised to book accomodation well in advance.

The walk is best attempted in six stages:-

Stage 3 Chollerford to Steel Rigg - length 12 miles. This section of the path passes he Roman fort of Chesters and the impressive Housesteads Roman fort.

Stage 4 Steel Rigg to Walton - length 16.25 miles. Stage 4 is one of the best sections of the walk, covering the the Birdoswald Toman Fort. As the path nears Walton, historic Lanercost Priory is a short walk to the south and well worth the detour.

Stage 6 Carlisle to Bowness-on-Solway - length 14.75 miles Most of this section of the route follows either the River Eden or the Solway Firth

Hadrian's Wall Weekend Trek Join Team Poverty in July 2012 for a trekking challenge through scenic and historic countryside that lines this UNESCO world heritage site.- 29th June- 1st July 2012. This is an exciting 2 day trek at Lanercost Priory and runs 25 miles along the only remaining section of the wall.