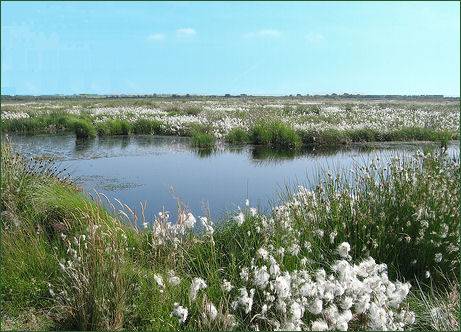 The north Cumbrian village of Drumburgh is situated 8 miles (13 kilometres) to the northwest of Carlisle and stands on the course of Hadrian's Wall, near to Burgh-by-Sands. The village lies in the old Barony of Burgh, dating from 1092. The barony was a bulwark against the Scots invading across the Solway.

The village's name means 'Ridge near the fort' and derives from the Brtythonic Celtic once spoken widely in the north of England combined with the Anglo-Saxon word 'Burgh'.

Coggabata Roman fort was located opposite a ford over the Solway, the site has been both partially built over by modern housing. The antiquarian John Leland visited the site in 1539 and commented that stone from the wall had been taken to use for buildings in Drumburgh. Excavations carried out in the early twentieth century by Haverfield, revealed the width of the Wall foundations at Drumburgh to be 9½ feet wide. It also determined that Drumburgh fort was added to the Wall following its original completion.

Drumburgh Moss Nature Reserve ( OS Grid reference- NY 255 586 ) which lies to the south of the village, is one of four peat bogs on the south side of the Solway estuary, which together are considered the best in England.

The reserve was purchased by the Cumbria Wildlife Trust in 1981. The moss a site of international importance, dominated by an expanse of lowland raised mire, one of Western europes's most threatened habitats. The nature reserve, is a haven for all sorts of wildlife, curlew and red grouse and redshank breed there, short-eared owls, adders and roe deer can be sighted. In winter the nature reserve often plays host to small numbers of geese from the huge flocks on the Solway. Waymarked trails provide a way to safely explore the peat bog. 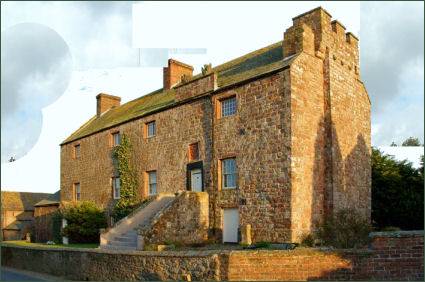 Thomas Lord Dacre constructed a red sandstone pele tower at Drumburgh, situated opposite one of the fords across the Solway Firth, in the sixteenth century. Known as Drumburgh Castle, Dacre's coat of arms (pictured below right) and his initials are proudly displayed over the first floor entrance.

The pele tower was built to provide defence against Scottish invasion, Drumburgh Castle formed a unit in a line of English strongholds which guarded the nearby Scottish Border.

Dacre (1467 - 1525) was a deputy to the Lord Warden of the Marches, an officer on the border with Scotland. He and his forces served under Thomas Howard, Earl of Surrey at the Battle of Flodden Fieldin 1513, where the invading army of King James IV of Scotland was crushingly defeated and its king killed. 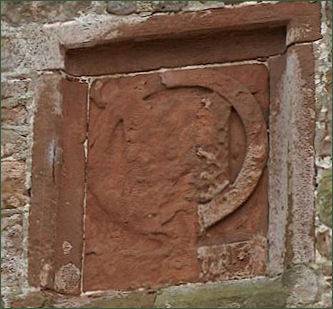 The rectangular stone building measures 22.9 metres in length and is 8.2 metres wide. The walls are 1.2 metres thick. The pele tower was built using stones taken from nearby Hadrian's Wall, parts of what is believed to be a Roman shrine are incorporated into the stonework outside the doorway on the first floor.

Licence to crenellate the tower which previosly occupied the site had been granted by King Edward II in 1307 to Robert le Brun. A ditch to the west and south is probably the only surviving evidence for this original building.

In the fifteenth century the property passed by marriage to Jacob Harington. By 1480 the building was in a ruinous state. It again needed urgent repairs in 1580 and by 1593.

In 1678 the Duke of Norfolk sold the building to John Aglionby who made further alterations to the building and by 1696 Sir John Lowther was the owner and during his time alteration works were carried out. After a long period of neglect it was fully restored as a private dwelling in the 1970s.

Towns and villages of Cumbria