The Edward I Monument

King Edward I of England, known as 'the Hammer of the Scots' for his repeated attempts to conquer that country, died at Burgh Marsh, Solway Moss on 7th July 1307, while waiting to cross the estuary on his way to Scotland to crush a rebellion lead by Robert the Bruce. 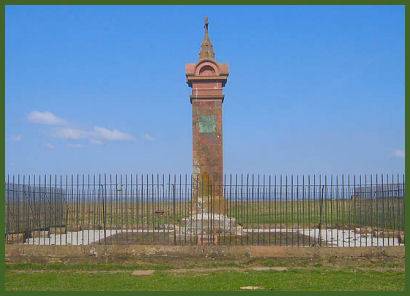 The present red sandstone monument which rises from Burgh Marsh, marks the spot where the king died, it was erected by the Earl of Lonsdale in 1803 and replaces an earlier obelisk placed there by the Duke of Norfolk in 1685. The inscription on the monument reads "Omni veneratione prosequens inclytam Edwardi primi famam, optimi Angliæ Regis, columnam hanc humifusam dirutamque, hic reponendam curavit Gulielmus Vice-comes de Lowther, Anno Salutis MDCCCIII" The pillar can be reached by following the signposted road from the village 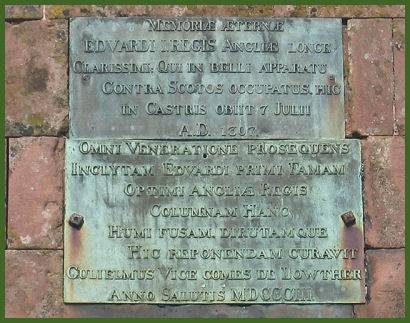 Edward I visited Carlisle several times during the last years of his life, a parliament had been summoned to meet in the city on the 20th January that year, but was adjourned due to the King's poor health, he attended it for the first time on the 12th March. The ailing but indomitable King , then aged 68, mortally ill but refusing to admit defeat, embarked on horseback on the journey which was to prove his last on 26th June. The protracted journey underlines the poor state of his health, he finally had to be carried in a litter. He reached Kirkandrews-on-Eden on 2nd July but struggled on until three days later he arrived at Burgh by Sands, where he finally breathed his last.

King Edward's body lay in state in St Michael's Parish Church at Burgh by Sands before being taken to London in stages for burial at Westminster Abbey, the mausoleum of English kings. His body was visited there by his eldest son, Edward, Prince of Wales, who had been in Scotland at the time of his father's death, he was proclaimed Edward II the following day at Carlisle.

So great had been Edward I's resolution to conquer Scotland and in reflection of his apprehension of his son Edward's ability to continue his work, he was purported to have asked his flesh to be boiled from his bones, so that they could be carried with the army on every campaign into Scotland.


The small village of Burgh by Sands ( which is pronounced bruff, not burgh) lies near the mouth of the River Eden on Solway Firth, around five miles from Carlisle. It is a small and peaceful village with buildings of warm sandstone and old weathered brick.

St Michaels church in the village, where King Edward's body was laid out, stands within the Roman fort of Aballava, on Hadrian's Wall. Stones from the Roman buildings were used in the churches construction. It was possibly once the site of a granary. The church underwent restoration in 1881, the west tower is believed to be fourteenth century and served as a refuge during Scottish border raids.

Biography of Edward I