The ruins of Calder Abbey lie in secluded wooded grounds by the River Calder. The abbey is a short walk from the west Cumbrian village of Calder Bridge. The atmospheric red sandstone ruins can be viewed from a nearby road, however acess can only be acquired through permission of the landowner. 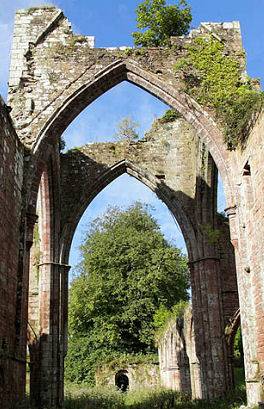 Originally belonging to the Svignac order, the abbey was founded for a colony of a colony of monks from Furness Abbey in 1135 by Ranulph de Gernon, 2nd Earl of Chester, he was also responsible for founding the priory of Wetheral in the early years of the reign of King Henry I. The Priory of St. Bees was founded by Ranulph's brother, William Meschin, soon after 1120.

Raids by Scottish border reivers seem to have been responsible for the difficult beginnings of the abbey and for the fact that it never attained any great size or wealth. The abbey was relocated to its present site following a refoundation in 1142. In 1148 it became Cistercian .

During the Reformation the abbey was disolved by King Henry VIII on 4th February, 1536. The last abbot was recorded as Richard Ponsonby , who recieved a pension of £12 per year, at the time a community of nine monks lived at the abbey and it had an annual annual income just over £50. The building was acquired by the royal commissioner, Thomas Leigh, who occupied parts of it.

The surviving remains include part of the tower, which now stands at about 64 feet high, and the west doorway, with some of the chancel and transept.


Abbeys and Churches of Cumbria