The Coast to Coast Walk traverses through 190 miles ( 304km) of glorious scenery from St. Bees on the Cumbrian west coast to Robin Hood's Bay on the Yorkshire coast. The walk was devised by author, illustrator and fellwalker Alfred Wainwright in 1973.

The walk passes through stretches of three contrasting national parks, the Lake District, the Yorkshire Dales and the North York Moors. Though not an official national trail, and consequently is not marked on OS maps, it remains one of the most popular long distance paths in England. In 2004 the walk was named as the second best walk in the world according to a survey of experts. Along the route are many places of interest including ancient castles, medieval abbeys and picturesque villages. The landscape and terrain is varied. The valleys and dales are easy going, but the fells - particularly those in the Lake District - are high and the gradients are often steep. The North York Moors, can be bleak and exposed.

If planning the walk you should always take sensible precautions before setting out on the route, ensure you are properly equipped and in possession of reliable weather forecasts. Good maps and a compass are essential. While the trail is reasonably well marked most of the time, some of the sections are not. The walk is best attempted from west - east as you then have the prevailing weather at your back and don't have the late afternoon sun in your eyes.

The route is split into the following 12 sections:- 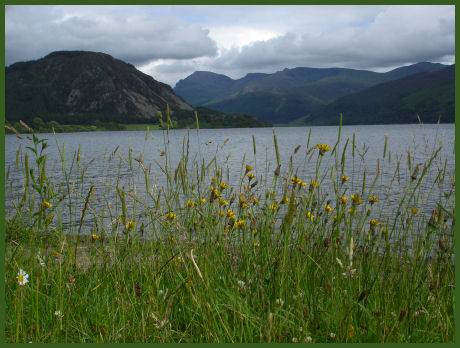 Commencing on the shores of the Irish Sea, at St. Bees with its impressive sandstone cliffs. The first climb of the walk starts shortly after leaving St. Bees, at Dent Fell, which offers magnificent views of the Cumbrian coast and the panoramic Lake District fells. Descending into the Nannycatch Valley takes the walker down to into the village of Ennerdale Bridge and into the Lake District National Park.

The second stage of the walk starts by skirting Ennerdale Water (pictured right) beneath the towering Pillar Rock. After crossing the River Liza, there is a choice of routes. The first traverses Red Pike, a fairly strenuous climb but one which offers excellent views. The second is the low level route along the valley floor. After passing through Honister this section ends at the village of Rosthwaite in Borrowdale.

The most strenuous section of the walk which involves a great deal of climbing, which is rewarded by superb Lakeland views from the fells. The climbing commences early on with the ascent of Lining Crag, skirting past Eagle Crag on the way.

From here there is a choice of descents towards Grasmere- the first option runs down Far Easdale Gill, but the alternative, via Helm Crag affords better views. The route branches off towards Grisedale Tarn rather than going into Grasmere. The route again divides into two, offering the higher option running up over Deepdale Hause and St Sunday Crag, the lower option making its way down the very picturesque valley of Grisedale Beck and into Patterdale, on the shores of Ullswater, where both routes again connect. 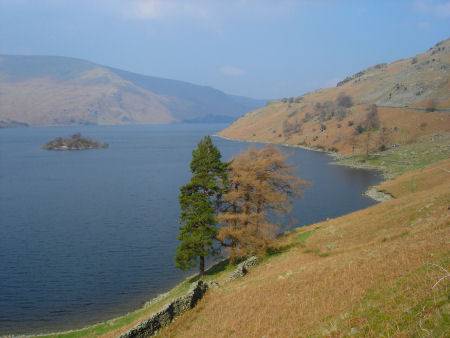 This section commences with an ascent of Boredale Hause before heading for Angle Tarn, then heading down Riggendale and on towards Kidsty Pike, at 780 m (2,559 ft) this is the highest point on the entire route which offers superb views of the Lakeland fells. After crossing that summit, the route drops steeply to follow shore of remote Haweswater Reservoir (pictured left) and heads towards historic Shap Abbey, disolved in the reign of Henrry VIII, at which point the route leaves the Lake District National Park. The section terminates at the village of Shap.

This section presents a more easy going part of the Coast to Coast walk passing through Oddendale to the lovely Cumbrian village of Orton (the trail does not enter the village). The trail continues to Newbiggin on Lune, passing Sunbiggin Tarn, the route climbs Smardale Fell heading for Lime Kiln Hill before reaching the Cumbrian market town of Kirkby Stephen.

Passing over Hartley Fell before entering the Yorkshire Dales National Park, the route continues to ascend Nine Standards Rigg, over moorland, high above the Eden valley, an alternative lower route goes by Lamps Moss rejoining the route at Ney Gill. This section heads toward Ravenseat and then onward to Keld, the halfway point .

The shortest section on the walk, passing through old lead mining country via the upper reaches of the Swaledale valley, through to the attractive small Yorkshire town of Reeth.

Traversing through Marrick Village, the route heads for Marske and on towards Applegarth Scar, before arriving at the attractive market town of Richmond, with the dramatic ruin of Richmond Castle, which dates to the eleventh century and its bustling cobbled market place.

A longer section than most on the walk, the route enters the Noth York Moors National Park, which marks an abrupt change in the scenery. Ascending Beacon Hill before crossing onto Scarth Wood Moor.

This section commences with a climb onto Urra Moor, much of the section follows the disused Rosedale Ironstone Railway. The Lion pub at Blakey is one of the highest inns in the country. Glaisdale, said to be one of the prettiest villages on the entire route, marks the end of this section.

The final section of the Coast to Coast Walk offers varied scenery. There's much to see on this section , including the North York Moors Railway station at Grosmont and the Falling Foss Waterfall. Following the May Beck River after Littlebeck, and its accompanying woodland and entering Norcliffe, which offers the first views of the east coast, the walk then follows the clifftop before arriving at panoramic Robin Hood's Bay.

St. Bees - An interesting and informative site on the coastal village of St. Bees, at the start of the Coast to Coast Walk.