Painted by both Turner and Constable, and described by Alfred Wainwright as a 'pageant of beauty from end to end' Borrowdale is one of the most stunningly beautiful of all the Lakeland valleys, with thickly wooded fells topped by dramatic towering crags. It follows the course of the River Derwent before it joins the bleak Honister Pass. The valley's manifold attractions render it a highly popular destination with tourists. 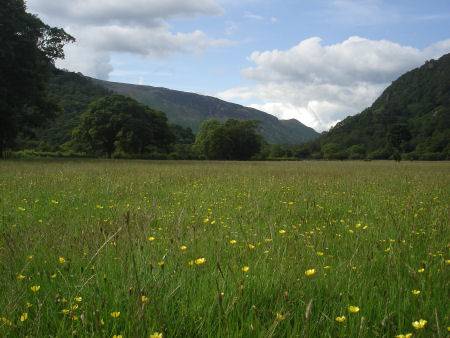 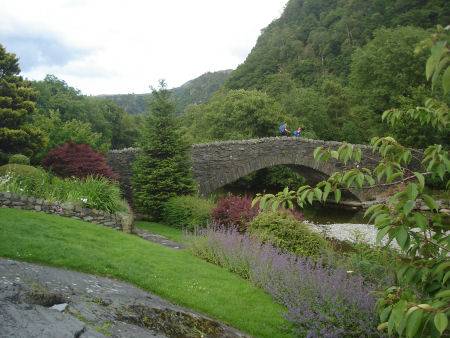 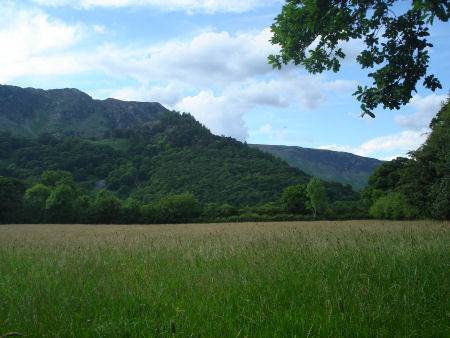 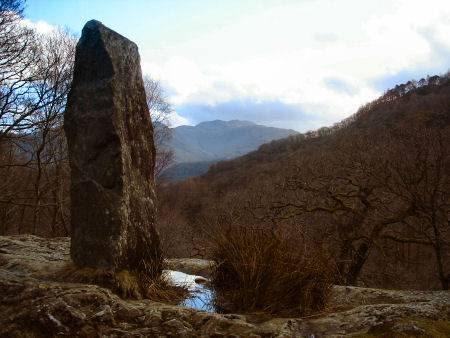 The highly attractive village of Grange-in-Borrowdale stands in a magnificent landscape at the foot of the dale backed by the soaring splendour of craggy peaks. Its graceful double arched pack-horse bridge, picturesquely spanning the rock strewn River Derwent, dates from 1675. Around a mile from the north side of Grange are the spectacularly beautiful Lodore Falls, which are superb after heavy rain. They can be via a path near the Lodore Swiss Hotel. 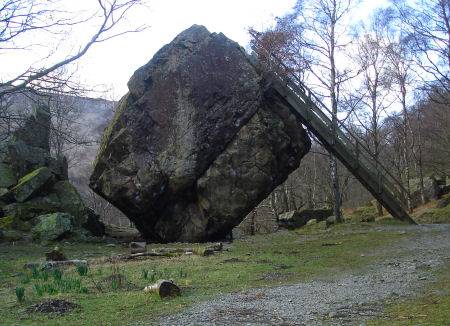 About three quarters of a mile south from Grange-in -Borrowdale stands the famous Bowder Stone, a huge boulder of volcanic rock which perches precariously on its base, it is the largest single boulder in the Lake District. It measures thirty six feet high and weighs around 1,970 tons. 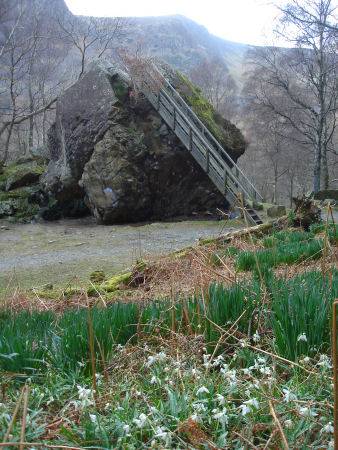 Deposited in its present position by by the action of glaciers, it can be climbed via a ladder on both sides.


Borrowdale has a long history, stone axes, dating to the Neolithic period, have been found on the slopes of Glaramara, while in the Iron Age a fort was built on Castle Crag. Scandanavian settlers came to Borrowdale in the tenth century and gave the valley its name after the Iron Age fort, from 'Borg' - fort and 'Dalr'- valley. They left signs of their presence in the names of landscape features 'fell' - mountain, 'beck'- stream, 'rigg' - ridge and 'thwaite' - clearing. In medieval times the monks of Furness Abbey and Foutains Abbey owned much of the land in Borrowdale, trade routes ran east and south from Borrowdale with loads carried over the fells by packhorse.

The River Derwent at Borrowdale and the memorial stone to the artist W. Hodgson 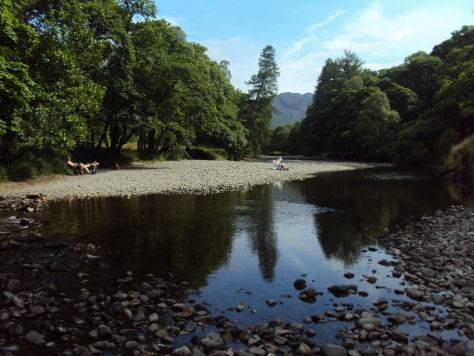 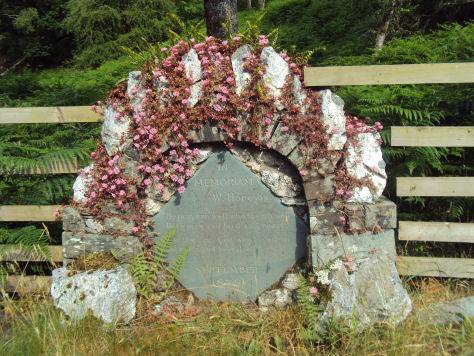 The ancient hamlet of Rosthwaite is popular with walkers and climbers, the village has a number of hotels and also offers bed and breakfast accommodation and a youth hostel. Its name derives from the Norse for 'clearing with the heap of stones'. A popular location with walkers, a trail leads from the village along the banks of the River Derwent as it flows north to Derwent Water. There are also excellent walks to the Honister Pass and along the shores of Derwent Water to Keswick. 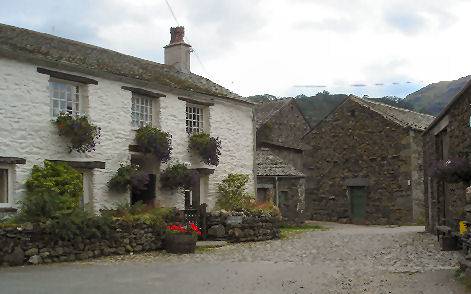 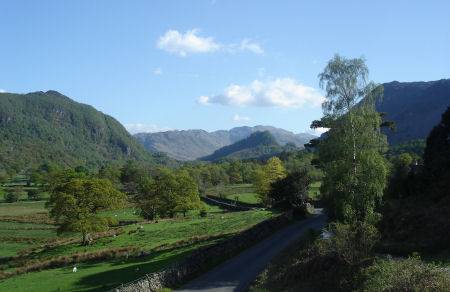 Situated a little further down the valley, the picturesque village of Stonethwaite consists of a cluster of whitewashed cottages which huddle around a village inn. The inn provides meals and has a cosy bar for walkers.

The picturesque village of Seatoller has a National Park Information Centre covering the area, which is housed within a converted barn.

Johnny Wood, owned by the National Trust, is situated on the road from Rosthwaite to Seatoller and is a superb example of an oak woodland with a two and a half mile nature trail. It is rich in its variety of mosses and interesting flora. There are six woods in Borrowdale that have been designated Sites of Special Scientific Interest, they include Castle Head Wood, the Ings, Great Wood, Troutdale Woods, Johnny Woods and Seatoller Woods. 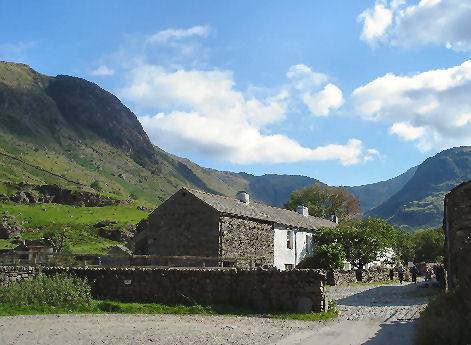 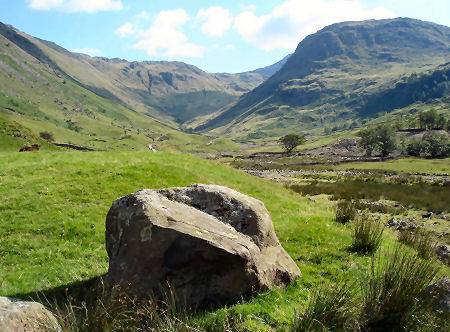 The small farming hamlet of Seathwaite, to the south, favoured for its proximity to Great Gable and Scafell, is a popular base for walkers. It is reached at the end of a narrow twisting lane. Seathwaite is the wettest inhabited spot in England with an average of 120 inches of rain recorded in a year. A footpath from the village takes the visitor on the short walk to the old packhorse bridge at Stockley, from which paths lead to Scafell Pike and Great Gable.

A walk at Borrowdale from Rosthwaite

*Commencing at the National Trust pay and display car park at Rosthwaite village, turn left and continue to the B road that runs through the valley. Cross the road and walk left, to take on your right, the signposted footpath for Stonethwaite which is part of the Cumbria Way Go over the footbridge and turn right.

*Follow the track along Stonethwaite Beck and continue along the gated, walled way to reach open fields. Over thwe wall lies the hamlet of Stonethwaite.Stay on the track as it as it runs deeper into Borrowdale, crossing a footbridge. Pass four water wracks over a gill and cross the footbridge and proceed right. The way continues along the east side, generally parallel with Langstrath Beck. Continue on to a footbridge over the beck. Cross and turn right.

* Pass through a gate and just before the start of a walled track, bear right and cross a field to and continue toward the noise of Galleny Force.

*After viewing the waterfall, climb the stile and continue beside the beck. Proceed over a high ladderstile up the slope. Follow the clear stled path to reach the Langstrath Inn. Continue through the hamlet and on along the narrow road, turn left at the signpostwhich directs to Borrowdale Road, via Chapel Farm. Pass a church and wind left of the cottages to proceed to a walled track, which leads to a signpost, turn right to cross a stile onto a B road. Turn right and after 50 yards, climb a stile, which has a signpost pointing the way to Rosthwaite.

*Cross a field to a ladderstile and continue edging right of the long grassy mound to a step stile which gives access to a narrow path. Turn right to join the road and walk left, following it as it wijnds left to cross a bridge over the River Derwent. Turn right and cross the farmyard and join the fenced path beside the river. Continue along the path to cross the river by stepping stones or the bridge further along. Both of these lead back to the car park at Rosthwaite.