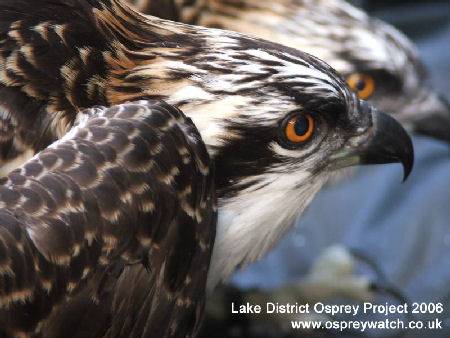 Wild Ospreys can be viewed raising their young chicks through the live video nest link at the Visitor Centre at Whinlatter Forest Park near Bassenthwaite Lake. Also of interest to the bird watcher and tourist alike is the Dodd Wood open air osprey viewpoint.

Friendly staff are on hand from 10am until 5pm seven days a week (April until the end of August) to answer any questions. High powered telescopes are provided to observe the wild Ospreys.

The osprey, (Pandion haliaetus) is known colloquially as the fish eagle or sea hawk, subsists on a diet of fish. It is a medium-sized raptor, reaching 60 cm (24 in) in length with a 1.8 m (6 ft) wingspan. It's head and underparts are predominantly white, while it has a brown eyepatch and wings. The irises of the eyes are golden to brown. The Osprey's arrive at Bassenthwaite back from the Gambia in Africa in late March and April, leaving again in August and September.

They normally breed for the first time in their third to fifth year. Ospreys are believed to be largely monogamous. The nest, called an eyrie, is built at the top of a large tree, usually a conifer, it is a large structure made of branches and twigs, lined with small twigs, moss, bark and grass. The eggs are laid n the latter part of April, the female usually lays two or three eggs at 1-3 day intervals and incubates them for 37 days. The chicks generally hatch a few days apart, in common with other birds of prey, the parents share thew care of their young.

The Lake District Osprey Project is managed by a partnership of the Forestry Commission, Lake District National Park Authority and Royal Society for the Protection of Birds.

The osprey exhibition is open from 10am- 5pm during the period that the ospreys are nesting, which is usually April- August.