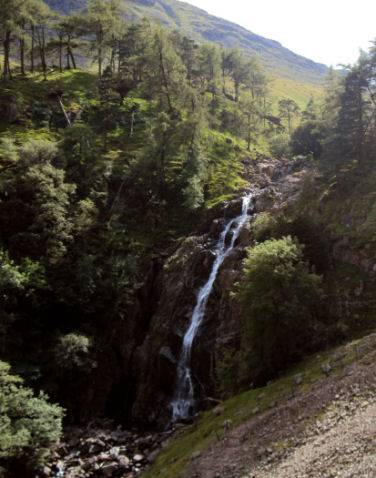 Dramatic Taylor Gill Force is situated at Stockley Bridge, Seathwaite, on the path between Seathwaite and Sty Head, at the head of the beautiful Borrowdale Valley. 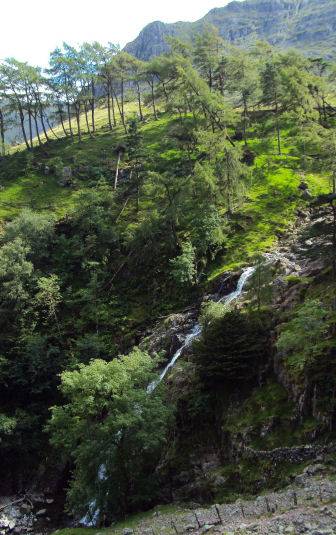 Taylor Gill Force is one of the highest waterfalls in the Lake District National Park and certainly one of the most beautiful, the long white plume of Seathwaite Gill drops an impressive 140 feet into the Seathwaite Valley amidst pine clad hillsides.

To reach the waterfall involves a walk of around a mile, involving some climbing.

Starting from the car park at Seathwaite. There is no charge for use of the car park (although during the summer months, due to its popularity with climbers, it may be difficult to find parking in the village.) Follow the signposted path from the village which leads from between two barns, crossing the infant River Derwent and continuing for around a mile to reach a high viewpoint which offers spectacular views down to Taylor Gill Force.

The waterfall is situated on property which is owned by the National Trust. The main footpath to the high peaks of Great Gable, Scafell and Great End runs up the right hand side of the force.

The water flows from Sprinkling Tarn which lies around 530 feet higher up on Seathwaite Fell, it continues past Seathwaite before flowing on into Borrowdale Valley.