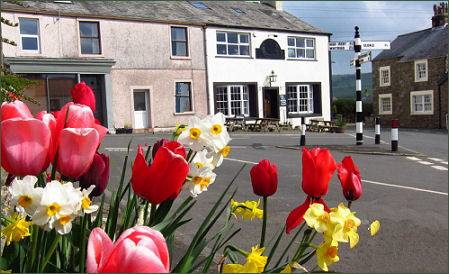 The pleasant and unspoilt Lakeland village of Ireby is situated above the River Ellen, in the peaceful fells around twelve miles to the north of Keswick and was once a thriving market town. It stands in what is known as 'the back of Skiddaw'. Skiddaw Peak, at 930 feet, and the Skiddaw Forest lie between Ireby and Keswick.

The market cross is believed to date back to 1200. The village was granted its market charter in 1237 by King Henry III and developed into a thriving sheep market. The moot hall and butter cross stand at the meeting of four roads in the centre of Ireby. In 1726 Ireby School was founded to educate eight poor children of the parish.

Ireby has two village halls, the main "Globe Hall" and the smaller WI Hall. The 'Sun Inn' was once a haunt of John Peel (nearby Ruthwaite was his home) but closed a few years ago but 'The Lion' pub remains open and is a popular meeting place. The Tun Inn was once famous for its country dancing which included the Cumberland Square Eight and the Ninepins Reel. These dances, similar to Scottish country dances, were mistaken by the writer, John Keats, when visiting Ireby on a walking tour, for Scottish ones. 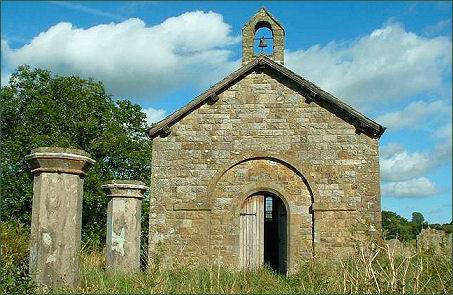 Ireby Old Church (pictured right) lies around a mile and a half to the north of the village, it stands in a field off a very narrow road and dates back to the twelfth century. The road is too narrow for parking so the church is perhaps better visited on foot.

The chancel is all that now remains of the original church. The stones of the church's nave were removed to build the new Gothic style church, St James, which was opened in 1846. St. Jame's church is located halfway between Ireby and nearby Uldale village.The old church's font with its four carved roundels was also removed, along with two of the arcaded columns, to use in the new church. The old church's arcaded east wall, contains three lancets separated by Transitional Norman capitals dating from circa 1170. The vicarage which dates from 1880 now serves as a country house hotel.

A mile south of the village lies Over Water. The tarn lies at an altitude of 617 feet, it was dammed in the 1920's and now serves as a reservoir for the town of Wigton. In the early summer its surface is dotted with waterlilies.