The peaceful and highly picturesque Newlands Valley, surrounded by soaring rugged fells, is located around three miles south west of the Lakeland town of Keswick and boasts stunning scenery. The renowned Lake District fell walker and guide book author, Alfred Wainwright " wrote of the valley with obvious affection in his 1984 book "Fellwalking with Wainright":-

"More than 50 years have gone by since I first set eyes on Newlands and in all that time the valley seems not to have changed in any way. Today it is the same sweet Arcadia I knew so long ago, lovely and secluded, an idyllic place of flowers and trees, of emerald pastures and sequestered farmsteads, all cosily sheltered by rough mountains, and having as its greatest blessing an undisturbed peace....." 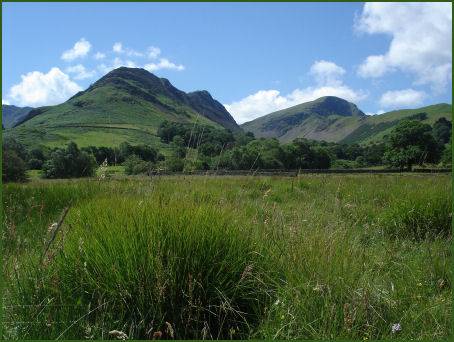 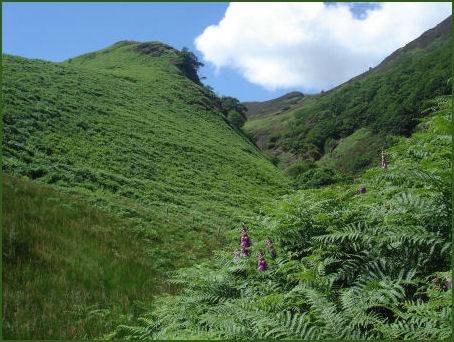 The surrounding fells include the dramatic peak of Cat Bells, Causey Pike, Ard Crags, Barrow, Dale Head and Robinson. Keskadale Oakwood, situated on the steep slopes of Ard Crags is a site of Special Scientific Interest and consists of ancient oak and alder woodland.

Settlements in the valley including Stair, its largest village and the hamlet of Little Town. The Newlands Adventure Centre is located Stair, the village also contains the only pub to be found in the valley, the Swinside Inn, which dates to the early part of the seventeenth century. The inn serves excellent food and offers tourist accommodation. 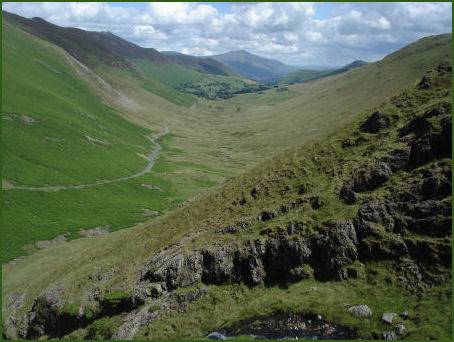 The quaint hamlet of Little Town, located beside Catbells, was the setting for Beatrix Potter's 1905 childrens book The Tale of Mrs. Tiggy-Winkle.

The small, whitewashed church, known as Newlands Church, stands by confluence of Newlands Beck, Scope Beck and Keskadale Beck, The original church on the site dated back to the sixteenth century, by the nineteenth century it had fallen into such a state of disrepair that it was gradually rebuilt, being re-opened in 1885. The attractive stained glass window on the east wall dates from 1845, while the south facing window contains a memorial to a soldier of the First World War. The church contains a table and oak pulpit dating from the early seventeenth century as well as with seventeenth century wainscoting. Wordsworth's poem "To May", composed after a visit by the poet to the church in May, 1826, is on display within the church. 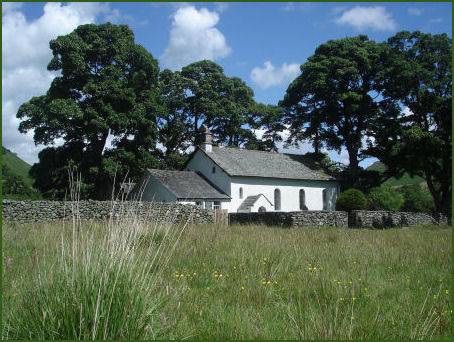 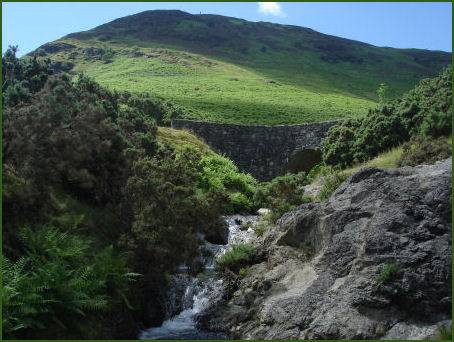 Extensive mining and quarrying has been carried out in the valley in the past, for lead, copper, silver and some gold. The Goldscope Mine at Newlands was once the most famous mine in the Lake District. The Goldscope mine is situtated on the lower slopes of Hindscarth. Mining has been carried out there since the sixteenth century. Such large amounts of lead and copper were extracted from it that German miners, who were brought over to work the mine in its early days, named it "Gottesgab" which means God's Gift. The mine ceased to operate at the end of the nineteenth century.

Moss Force, an impressive waterfall, can be accessed from the car park at the top of Newlands Hause.

A walk from Newlands Hause

Commencing from the roadside car park at Newlands Hause which is located just before the road descends to Buttermere(OS grid ref. NY192176) follow the steeply ascending footpath to Ard Crags. Remain on the left hand path.

*On arriving at the top of Knott Rigg follow the ridge ahead, descending into and out of a col and proceeding along the ridge.

*Retrace your steps to return.