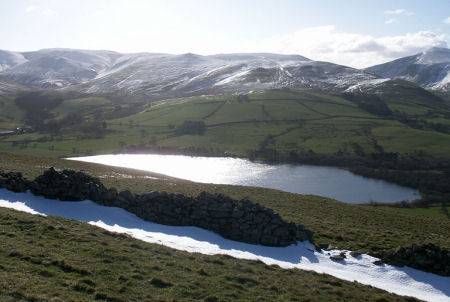 Over Water is located around one mile south of the Lakeland village of Ireby and is about a fifteen minute drive from the town of Keswick.

The tarn lies at an altitude of 617 feet, it was dammed in the 1920's and now serves as a reservoir for the town of Wigton. In the early summer its surface is dotted with waterlilies.

Its name was recorded as 'Orre Water' in the seventeenth century, which derives from the Old Norse name of 'Orri's tarn'. Although there is no access to the general public, there are a number of public footpaths in the area which take in views of the tarn.

Overwater Hall, which now serves as a country house hotel, dates from 1811.Overwater Hall, now a hotel, was built in 1811, it was purchased by a Mr. Gillbanks who made himself a fortune and a marriage in Jamaica. Unfortunately he also dallied with a poor Jamaican woman, who followed him to Overwater Hall when he returned. He took her secretly out to the middle of the tarn and threw her overboard. As she clung to the boat, he ruthlessly chopped off her arms. His secret was not discovered during his lifetime. But it seems the girl's armless ghost is seen on numerous occasions, especially at New Year's and particularly in Room 3 of the hotel!

Over Water is now owned by the National Trust.


Lakes and Tarns of Cumbria