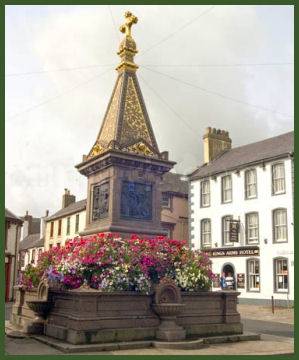 The ancient market town of Wigton lies ten miles south west of Carlisle, on the Solway Plain between the Caldbeck Fells and the Solway Coast.

The town's name derives from Wiggeton, which means the farmstead or village of a man called Wicga and 'tun'. Wigton recieved its market charter in 1262. The town was burnt during the course of a violent Scottish raid in 1322, when the abbey of Holme-Cultram was also plundered, and in 1648, during the Civil War, it was occupied by the van of the Duke of Hamilton's army.

Wigton evolved from a pre-medieval street plan, which can still be traced today. The triangular market place stood at the centre of the Medieval town of Wigton. A wooden Market Cross once stood on the site that the memorial fountain now occupies.

The granite fountain features bronze relief panels illustrating the 'Acts of Mercy' by Thomas Woolner, an artist of the 19th century Pre - Raphelite movement. The panels depict 'Visiting the Afflicted', 'Clothing the Naked', 'Instructing the Ignorant', and 'Feeding the Hungry'. The fountain was erected in 1872 by George Moore of Whitehall, in memory of his wife. The square is surrounded by elegant buildings dating mainly from the Georgian era.

A weekly market is still held every Tuesday in the covered market hall.

George Fox, the founder of the Quaker movement, or the Society of Friends, preached in the Market Square in July, 1653. On a further visit later that year, Fox was turned away by angry townspeople. The first Quaker Meeting House was built at Wigton by his host William Pearson of Tiffenthwaite Farm, there is still a Quaker congregation in the town to this day. 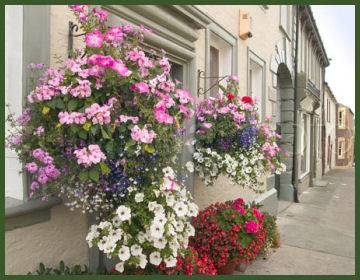 The parish church, St. Mary's, dates from 1788 and is based on the design of St. Michael's church at Workington. A church has occupied the site since the twelfth century. Within the church are some fine stained glass windows and an organ with 1100 pipes which dates to 1912.

The author and broadcaster Melvyn Bragg was born in Wigton and the town features prominently in a number of his best works including The Cumbrian Trilogy, The Soldier's Return and the acclaimed oral history, Speak for England. John Rooke, the writer on political economy and geology was also born here and lies buried in the churchyard.

Charles Dickens visited the town in 1857, along with Wilkie Collins and mentions it in The Two Idle Apprentices. Dickens stayed at the King's Arms Hotel, originally a coaching inn.

Nearby stands the Roman fort of Maglona also known as Old Carlisle Fort (NY 2646) located on the Wiza Beck, a tributary of the River Wampool. The fort was erected in the first century AD as home to a partly mounted auxiliary regiment. A settlement grew up around it, but was abandoned some time after the Romans left Britain in the early 5th Century. Little now survives apart from the earthworks, as the stones were taken to rebuild Wigton in the 18th and 19th centuries.