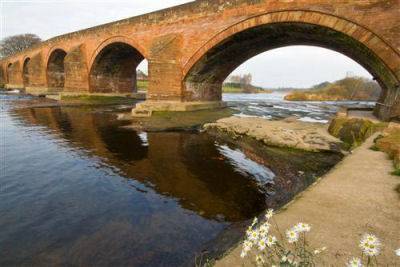 The small market of Longtown is steeped in history and is located on the Cumbrian border with Scotland, lying north east of Gretna. Longtown stands on the banks of the River Esk, which is spanned by an attractive red sandstone bridge which dates from the eighteenth century.

The town makes a good starting point for walks along the River Esk and through the surrounding countryside. The Solway Firth, situated close by, is popular with birdwatchers. 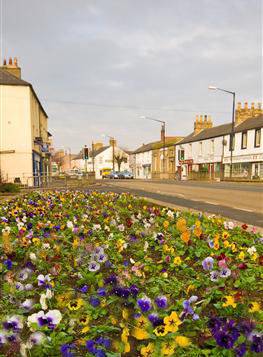 Longtown is a farming town, and much of its business depends on agriculture. It hosts the largest sheep market in England where cattle are also auctioned. The first animal to be found to be infected with the disastrous outbreak of foot-and-mouth disease of 2001 was found to have been purchased at Longtown market.

Longtown was planned and built in the mid-eighteenth century by local landowners, the Grahams of Netherby. They laid out the town's wide, tree lined streets, including the coaching inn on the crossroads, the Graham Arms. The Netherby Estate, owned by the Graham family for the past 400 years, provides pleasant well marked woodland walks in the area of varying lengths and provide ample car parking. The privately owned woodlands were opened to the public in January, 2004.

The red sandstone estate church in Longtown, St Andrew (Kirk Andrews upon Esk) dates to 1776, being restored in 1893. The building displays Itailianate influences.

The Gothic style parish church of St. Michael was built in 1609 and stands on land known as Arthur's Head, the parish name became corrupted to Arthuret. The building was not completed until 1690, due to workers making off with the funds. The church underwent extensive renovation in 1750. Archie Armstrong, jester to the seventeenth century Stuart Kings James I and Charles I, lies buried in the churchyard. The church occupies the site of a much older place of worship, which dated to 1150. A holy well is situated by the church, which has a stone canopy and steps. The well was used for baptisms until the 1970s. A cross in the churchyard represents the knights of Malta.

The nearby wooded knoll is the reputed site of the Dark Age battle of Arfderydd, fought by Urien of Rheged and the invading Saxons. The battle is referred to in the medieval chronicler Geoffrey of Monmouth's Vita Merlini and also the Annales Cambriae in the year 573. A bard named Lailoken or Myrddin is reputed to have gone mad after seeing his soldiers slain during the battle and wandered into the surrounding forest. He is thought to be the original of the magician Merlin, of Arthurian fame.

Due to its close location to the border with Scotland and its position at the centre of the so-called 'Debatable Land' (disputed areas along the border), the town's history has been inevitably turbulent. Attacks by Border Reivers were frequent occurences in the medieval period.

Nearby lies the site of the Battle of Solway Moss, fought between the English and the Scots on 24th November, 1542. Oliver Sinclair, the favourite of King James V, King of Scots, led an invasion into England at the head of an army that was around 10,000 strong. The Scots were met by an English army of about 3,000 men under Sir Thomas Wharton. The battle resulted in a devastating defeat for the Scots, King James died but two weeks later, at his palace of Linlithgow, in a state of abject depression at the fate of Sinclair.

Images courtesy of the Cumbria Tourist Board