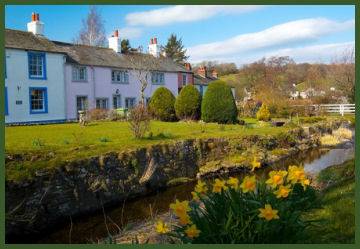 Caldbeck is a highly attractive village, which is situated 11 miles south west of Carlisle. 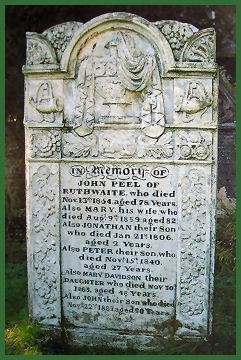 An elaborate headstone adorned with hunting horns and a hound stands near the church porch of Caldbeck's St. Kentigern's church, marking the grave of the famous John Peel. Immortalised in the song 'D'ye ken John Peel'.

Peel was a local landowner who adored hunting, he was reputed to be around 6 feet tall with sparkling blue eyes. He was a firm advocate of hunting on foot in the traditional Lakeland manner, he was born Park End, near Caldbeck in 1776, the son of a local horse-dealer.

Pell died as a result of a fall from his horse in 1854 at the age of 78. His wife Mary Peel and other members of his family lie buried with him. John Peel was a colourful character, who, frequently clad in a beaver hat, his trademark long grey coat and knee breeches, was an indefatigable hunter and a mighty drinker. He eloped to Gretna Green with a local girl Mary White, who became the mother of his huge family of 13 children. One of these children, also named John, who is buried with his parents, is recorded on the stone as having reached the age of ninety.

Oppposite the churchyard gate stands a shelter dedicated to Peel and his friend John Woodcock Graves, who wrote the catchy song. 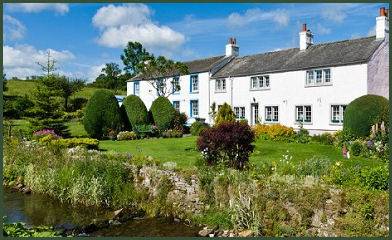 Woodcock worked in the mill which manufactured the grey cloth mentioned in the song. 'D'ye ken John Peel' was set to its present tune in 1868 by William Metcalfe, a choirmaster at nearby Carlisle Cathedral. The song was later adopted as the march of the Border Regiment after the charge of the Light Brigade at Balaclava, when the infantrymen whistled the tune as they helped the cavalry prepare for attack.

St. Kentigern's church itself was built in the twelfth century, St. Kentigern, a Dark Age missionary, is reported to have preached in the area whilst travelling from Scotland to Wales in 553A.D.

The arch of the church's nave, some of its windows and the entrance to its south porch are all probably Norman, but extensive alterations were carried out in Victorian times. The rectory, which overlooks the churchyard, is a handsome building which dates from the eighteenth century and features Gothic style windows..

The village derives its name from the Caldbeck, which flows through it, the name means 'cold stream' in the old Norse language. The Caldbeck is a tributary of the River Caldew, once used to power woollen mills, which once produced the grey cloth for John Peel's long grey coat. The beck is crossed by a picturesque arching stone bridge, leading to a group of eighteenth centuty cottages. An old brewery stands by the bridge over the Caldbeck.

Around half a mile from the village lies a highly attractive limestone gorge with waterfalls and woods, which is known as the The Howk , there stands the ruins of an old bobbin mill. The mill once boasted the largest waterwheel in the country.

The Priest's Mill is located on the river bank, (at OS grid reference- NY 326 399) and stands beside St. Kentigern's church in Caldbeck. The stone building dates back to 1702 and was constructed by the local rector, who also responsible for building the church steeple.

The mill was first used for grinding corn, then later operated as a sawmill and joiner's workshop until 1965, when floods on the beck caused the destruction of the mill dam.

An award winning restoration of the mill was completed in 1986. The only remaining machinery is the waterwheel , which measures 14 feet in diameter, it has now been restored to working order.

The mill is today used as a vegetarian restaurant and craft and gift shops.