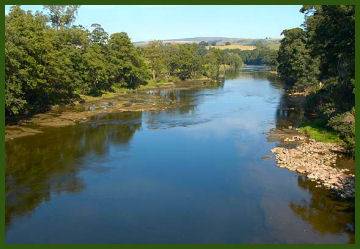 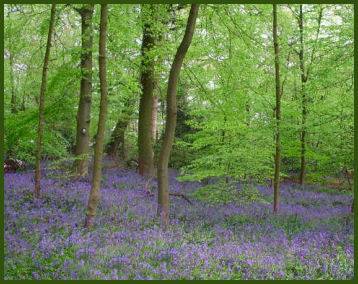 The charming small North Cumbrian village of Armathwaite lies on the River Eden, one of England's finest salmon and trout rivers.

The broad River Eden is a predominant feature of the village, with sandstone cliffs plunging down to the river. An attractive sandstone bridge spans the river.

The land which Armathwaite Castle occupies was granted in 1444 to John Skelton. Another John Skelton (circa 1460- 1529) was possibly Henry VIII's poet laureate. Skelton, who was also tutor to Henry in his youth, is reputed to have been born in the village.

Armathwaite has two pubs, both of which serve meals. The Red Lion Hotel occupies a beautiful position at the foot of a tree-clad bank above the river.

The small and simple village church of Christ and St. Mary stands on the edge of the village. It was built in the seventeenth century by Richard Skelton of Armathwaite Castle and replaced an earlier church which once stood on the site. It contains windows made by William Morris. 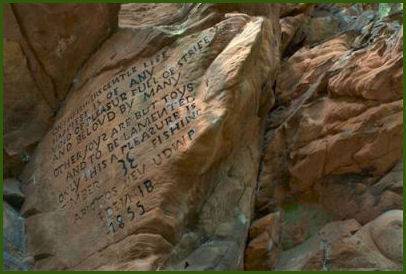 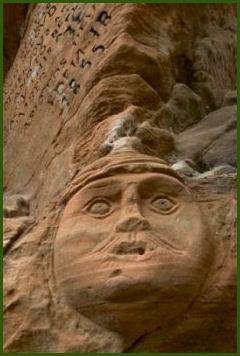 The village's name is thought to mean 'the clearing of the hermit'.

At nearby Coombs Wood, just south of Armathwaite, (OS grid reference NY 5045) an attractive area situated on a particularly beautiful stretch of the River Eden, can be seen the curious rock carvings in the soft red sandstone cliffs.

The interesting carvings consist of various faces and also a salmon, higher up there can be seen an inscription, which consists of a quotation from Isaac Walton's "Compleat Angler":

Nearby, there is an inscription of greater antiquity which is believed to be of possible Roman origin.

The carvings and inscriptions of a later date are said to have been produced by William Mounsey, (1808 -1877) an eccentric local scholar and traveller. Further examples of his work can be seen at the Caves of St.Constantine at Wetheral and on the Jew Stone at Mallerstang Dale.