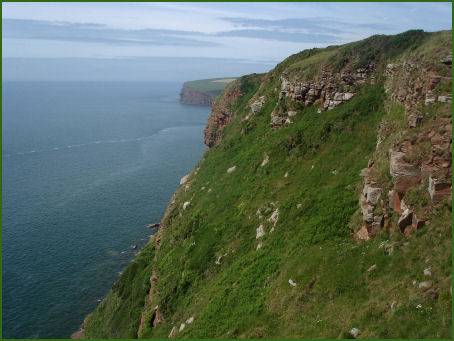 The Cumbria Coastal Way is a waymarked long distance footpath stretching for 182 miles (298 km) from the Cumbrian boundary with Lancashire to the Scottish border.

The coastal way commences at Silverdale, which overlooks the treacherous sands of Morecambe Bay, and passes around the southern Cumbrian peninsulas, through the beautiful Lake District National Park and along the coast to the Solway Firth, famed for its superb sunsets and the the historic city of Carlisle before ending at the famous border town of Gretna.

The route traverses one of the most beautiful coastlines in Britain, which rich is in wildlife and industrial and archaeological heritage, passing through Silverdale, Arnside, the attractive Edwardian resort town of Grange over Sands, and the vast tidal wastes of Morecambe Bay.

The route continues on through the southern Cumbrian peninsulas, the historic town of Ulverston, birthplace of Arthur Stanley Jefferson better known as comic genius Stan Laurel, Barrow, Askham, Broughton, Millom, Ravenglass, situated on the estuaries of three rivers and home to the Ravenglass and Eskdale Railway, 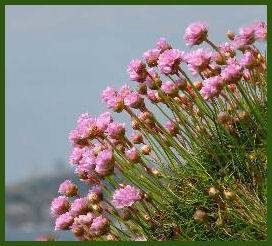 The railway runs for seven-miles from Ravenglass through some of England's most magnificent scenery to Dalegarth station and visitor centre in Eskdale, nestling at the foot of the highest mountains in the country. the small town has an interesting Roman Bath House, which presents the highest surviving Roman remains in the north of England. Dating from around 130 A. D., it once formed part of the Roman fort of Glannoventa

The route passes the spectacular fissured red sandstone cliffs at St. Bees Head, (pictured above) which rise to a height of 300 feet, St. Bees Head is the only heritage coast between Anglesey and the Scottish border. The cliffs are home to one of the largest cliff seabird colonies in England. There is an RSPB nature reserve, which provides several viewing stations for observing nesting colonies of puffins, razorbills and the only British colony of black guillemots. St. Bees Priory, dating to the twelfth century, is well worth a visit.

The nearby Georgian port of Whitehaven is also on the route, with the interesting Beacon Museum and Gallery and The Rum Story Museum and Workington with its Harrington Marina. 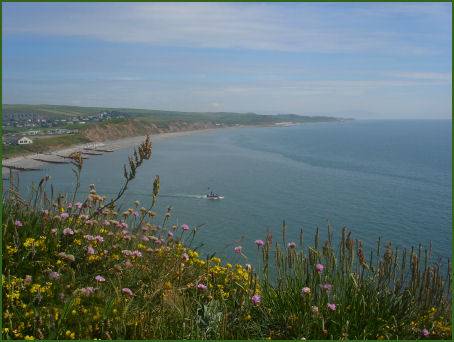 The seaside town of Maryport, which boasts a long history and began life as the Roman fort of Alauna in around 122 AD, The Senhouse Roman Museum at Maryport is dramatically situated on cliffs overlooking the Solway Firth, displays the largest group of Roman military altar stones and inscriptions from any site in Britain. The Maryport Aquarium is an award winning visitor attraction and one of the best locations for viewing the varied marine life of the Irish Sea.

The pleasant seaside village of Allonby, the Victorian resort town of Silloth on the Solway Firth, rich in bird life, and the border city of Carlisle, Cumbria's only city, with its castle, superb cathedral and the Tuille House Museum.

The Cumbria Coastal Way can be walked in its entirety, which takes around 10 -14 days, or in sections. The path is relatively easy, is suitable for all abilities and rarely climbs over 100 metres above sea level. The trail was established in the late 1980's by Cumbria County Council.

Whilst May through to October is perhaps the best time to attempt the walk, it can really be enjoyed at any time of the year.

The wildlife interest in the area is to be found mainly in the mosslands at the head of the Duddon estuary and a number of coastal tarns, rivers and lagoons, the valley woodlands and wet grasslands to the north and east of Workington.

Much of the route parallels the Cumbria Coast railway line operated by First North Western, and there are a number of local bus connections