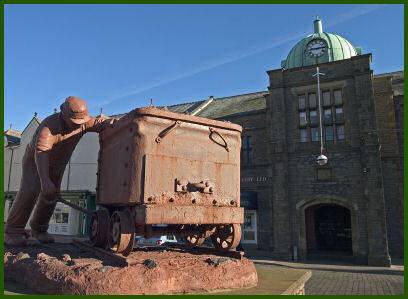 The Cumbrian coastal town of Millom stands on the Duddon Estuary, in Victorian times it was still a small hamlet known as Holborn Hill. The town provides access to unspoilt golden beaches with panoramic views of the nearby Lakeland fells.

The town saw rapid expansion with the discovery of iron ore and the opening of the iron works and mines. A statue has recently been erected to commemorate the town's industrial history, it depicts a scutcher, responsible for stopping the iron ore tubs with an iron bar.

The interesting Millom Folk Museum was begun in 1974 and is now located at Millom Railway Station. The museum covers the history of iron mining and steel making in the town and its surrounding areas, as well as having a section on the life and works of writer and poet Norman Nicholson (1914-1987) who origonated from the town.

Victorian St. George's Church with its elegant spire which forms a local landmark, was designed by Paley & Austin and was completed in 1877. The church contains the magnificent Norman Nicholson Memorial Window, depicting images from Nicholson's life and work.

Holy Trinity Church, located close to the Castle, is an sandstone structure partly dating from the 12th century, and contains has monuments to the Huddlestone and other prominent local families. In the churchyard stands an ancient stone cross. 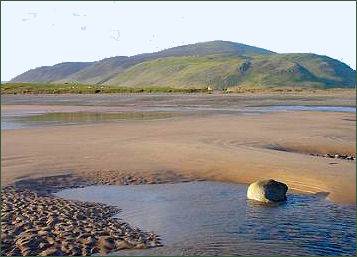 Millom Castle, now a working farm and originally the home of the Huddleston family, is a small rectangular structure which dates from 1335, during the reign of King Edward III and occupies the site of on an earlier motte. A tower was constructed within the walls in the fifteenth century. The castle sustained significant damage during the Wars of the Roses, when Lancastrian forces attacked it in around 1460. It was captured by Parliamentary forces during the Civil War. Repairs were carried out but the building later fell into decay. Millom Castle is not open to the public, but there is a footpath which runs nearby.

The RAF Millom Museum stands the former officer's mess at Millom Airfield and contains archives from much of the north -west of England. Exhibits include a collection of 1500 photographs; various artefacts and items recovered from crash sites within the Lakes. The displays and exhibitions are divided into five internal and one external zone, creating a captivating insight into military and aviation history. With literally thousands of displays RAF Millom offers a unique and fascinating glimpse of the past.

The nearby Hodbarrow Point RSPB (Royal Society for the Protection of Birds) Reserve, a Site of Special Scientific Interest, is a popular location with birdwatchers.