The small market town of Egremont is situated 10km (6 miles) southeast of Whitehaven at at the foot of Uldale Valley and Dent Fell, a few miles from Cumbria's western coast. 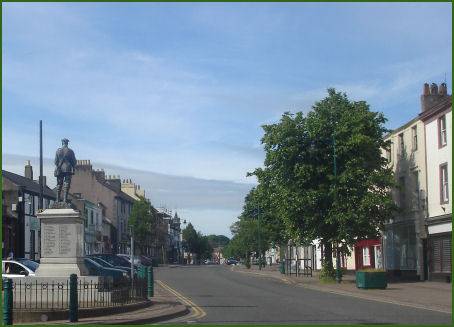 Egremont has an ancient and fascinating history, the Vikings built a fort there at the end of the last millenium. The Norman name is most likely to derive from the town of Aigremont in Normandy. The town was granted its market charter by King Henry III in 1267. The Scottish King, Robert Bruce sacked Egremont in 1322 resulting in a huge death toll.

Sandstone Egremont Castle, once the seat of the barony of Copeland, stands above the River Ehen and occupies the site of the original Viking fort. It was founded by William de Meschines in around 1130-1140 and took in all over a hundred and fifty years to complete.

After the castle fell into disuse, some of the stone was taken and used to replace the shop and house fronts on the Main Street and in the Market Square some of which date back to the fifteenth century.


The interesting sandstone church of Church of St Mary and St Michael was founded in 1220 but was rebuilt in the Early English style in the nineteenth century. It was granted to St. Bees Priory by William de Meschines. The church boasts some fine thirteenth century windows in the chancel.

The mining of iron ore on a large scale started in Egremont in around 1830. The Florence Mine, which stands to the south of the town, is the last working deep Iron Ore mine left in Western Europe and produces ore, products for the cosmetics industry and high quality haematite. At the Florence Mine Heritage Centre visitors may see the story of the miners and how they lived, worked, and extracted ore from the ground. The museum contains the clothes they wore, the shovels they used and the clay pipes they smoked. There is also a reconstruction of a drift, or tunnel, which provides the opportunity to see what mine life was like at the beginning of the twentieth century.

Lowes Court Gallery, situated on the main street, also serves as Egremont's Tourist Information Centre, it has constantly changing exhibitions throughout the year. The Gallery is housed in an eighteenth Century listed building and was established in 1972 to promote the appreciation of the visual arts in Cumbria.

Egremont is home to an annual Crab Fair, which origins date back to 1267. The fair today combines ancient and traditional events with modern attractions in a unique way, attracting visitors from all over the world. The Crab Fair is particularly famous for the World Championship gurning competition, where contestants pull ugly faces through a horse collar. This years Crab Fair will be held on Saturday 20th September, 2008.