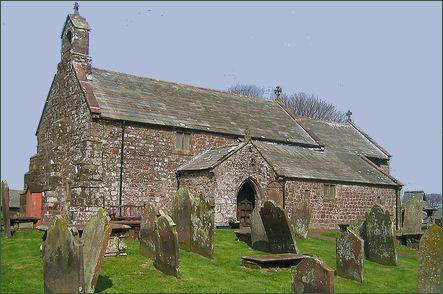 Crosscanonby, which is situated on the Solway Coast, lies less than 2 miles (3.2 km) Northeast of Maryport and 8.8 miles (14.2 km) to the south of Siloth.

The earliest form of the village's name was 'Crosseby', which derived from the Old Norse "'krossa býr' meaning 'b? (village, hamlet) marked by crosses'. The name 'Crosscanonby' results from the gift of land in Crosby with the church to the canons of Carlisle. 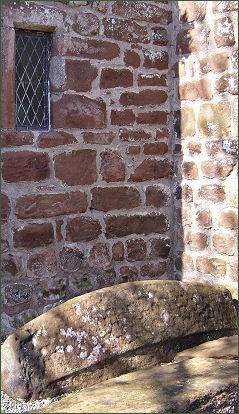 The red sandstone village church of St John the Evangelist (pictured left) is a grade I listed building and occupies one of the earliest Christian sites in the county of Cumbria. The church was constructed circa 1130 A.D. and has been extensively restored since 1880. A gravestone dating to the Viking era is incorporated in the lower centre to the church wall. Some of the stonework in the original construction is believed to have come from earlier Roman settlement in the Crosscanonby area.

Original parts of the church include the chancel south window, a south window located above an arch leading to the fourteenth century south chapel, the west buttresses, and a doorway. The alabaster font dates from the thirteenth century. There is also is asection of a tenth century cross-shaft carved with two dragons. The church contains a wealth of carved stones. The carved oak minstrels gallery dates from 1730 but was restored in 1935.

During a restoration of the building in 1880 a number of sculptured stones were found in the fabric of the building and ten years earlier the lower part of a Roman altar was found in the churchyard, which had been dedicated by Acilianus, prefect of the 1st Cohort of the Dalmations. The most interesting of these stones is the remarkable 'Lawrence' slab, so called because it has been assumed that the human figure on it represents St Lawrence who was martyred on a grid iron. Outside the church porch are a small collection of tombs, which include a Viking hog-back tomb (pictured right), also in the churchyard stands the tomb of local salt tax officer John Smith, who died in 1730. The tomb has an unusual panel showing the salt officer working at his desk. 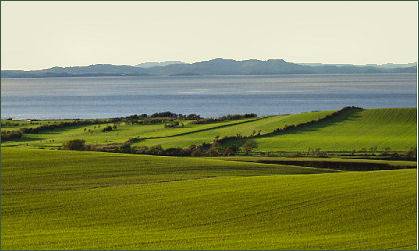 To the north of the village, along the coast, and on Hadrian's Cycleway, is the Roman Milefortlet 21, part of the Hadrian's Wall World Heritage Site, which is thought to date back to 79 A.D. and 122 A.D. Milefortlet 21 was part of a system of defence, including Hadrian's Wall, developed to protect this far flung corner of the Roman Empire. It can be seen from a viewing platform by a roadside car park.

Crosscanonby salt pans are located to the north of the village, where salt was produced from the 1630s until around 1760, it is thought that some of the worker's cottages were constructed in here at the same time. When the coast road, the B5300, was constructed in 1824, it ran through the middle of the saltpan site. The cottages became a pub, then reverted to being cottages again in 1900.

Crosscanonby Carr nature reserve, was the first nature reserve in the Solway Plain AONB. It first began as a Solway Plain Rural Initiative Project, which evolved from a vandalised site. Crosscanonby Carr now provides a wetland, meadow and woodland refuge for numerous animals, birds and plants. The site has an Access for All Trail provided for people with all disabilities