Swinside Stone Circle, which dates from the Bronze Age, is one of the most impressive stone circles in the Lake District or Cumbria and is considered to be amongst the finest in Europe.

The circle stands in a superb setting amongst a mountain backdrop on artificially raised ground five miles north of the town of Millom. Fifty-five stones now remain of the original sixty, of which thirty-two still remain standing.

Swinside is sometimes referred to as Sunkenkirk, its alternative name derives from a local legend that the Devil caused the stones, which were intended for building a church, to sink at night into the ground The very well preserved circle is 93 feet eight inches (28.5 m) in diameter. The tallest stone is a high pillar located at the northernmost point of the circle. It measures 7 feet 6 inches high. 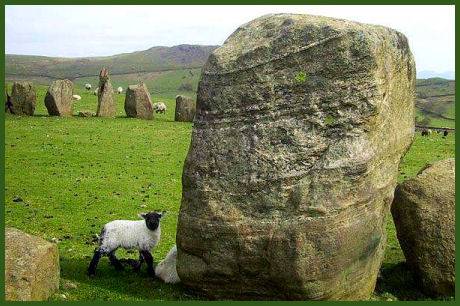 There is a recognisable entrance 2.1metres (7 feet) at the south east of the circle which consists of of a wide gap flanked by two portal stones just outside the perimeter. The entrance gap measures 2.1 metres. A similar entrance can be seen at the Long Meg and her Daughters Stone Circle at Little Salkeld.

There is midwinter sunrise marker looking from the centre of the circle at the two southernmost portal stones. Archaeological excavations at the beginning of the twentieth century revealed that the stones are bedded in a layer of packed pebbles.

Access to the circle is via a farm track from a minor road off the A595. The walk from the parking area, which is located on the eastern side of Black Combe, is about half a mile. The circle stands on private ground, but can be easily viewed from a nearby public footpath. Nearby Raven Crag provides some very good high views.


Prehistoric Sites in the Lake district