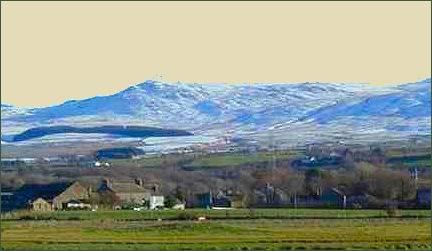 The pleasant village of Waberthwaite lies in a picturesque setting on the estuary of the River Esk and overlooks Ravenglass and historic Muncaster Castle.

The Old Norse term 'Wyberg', from which the village's name derived meant 'Holy Mountain'. Arthur Boyvill, third Lord of Millom, gave the manor to the husband of his daughter in the twelfth century, he assumed the name of "de Wayburthwait". Waberthwaite was the north western boundary of the lordship of Millom. Later in a deed of 1392 Thomas de Berdesey granted to Sir Richard de Kyrkeby, the manor of "Wayburthwayt", and the advowdson (the right to appoint the vicar) of the church of St James (now St John). The advowdson remained in the hands of the Kirkbys until about 1608, when it passed to the Pennington family, who also became Lords of the manor

Waberthwaite is well known for its delicious Cumberland sausages. Since 1828 the local Woodall family have been producing Hams, Bacon and Sausages for eight generations in Waberthwaite. Since changing the Company name to R B Woodall (Waberthwaite) Ltd in January 2011 the family continues to operate from their famous shop, which doubles up with the village Post Office, producing a fine range of Hams, Bacon and Traditional Cumberland Sausage. 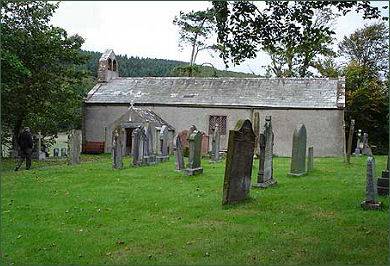 The small and simple village church of St. John stands by a bend in the River Esk. The building dates back to the twelfth century and may occupy the site of an earlier church, as an ancient cross-shaft stands in the churchyard, comparable with the Irton Cross. The church font dates from the Norman era, and consists of a large solid block of sandstone, it may have been made from the base of a Roman pillar. The west window is fifteenth century while the others date from the sixteenth or seventeenth centuries. In the interior of the building are box pews and a pulpit which dates back to 1630. There is also a painted panel from 1778 displaying the arms of King George III.

An ancient Anglo-Scandinavian Stone Cross (right) has a Cross Shaft rising to two metres in height, although badly weathered, the edges are still clear. The cross is thought to date from the ninth to tenth century, and displays influences of Anglo-Saxon and Viking carving styles.

The nearby Roman fort at Ravenglass lies on the other side of the river Esk.