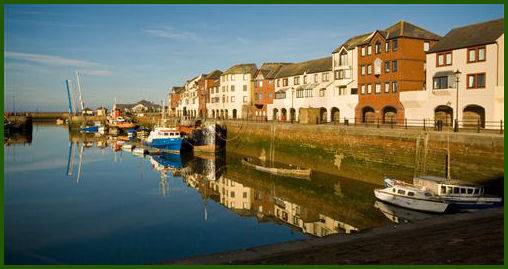 The attractive seaside town of Maryport is situated on the northern coast of Cumbria, and is the southernmost town on the Solway Firth. The town used to be known as Ellenfoot, but in Georgian times, as it developed, its name was changed by Humphrey Senhouse in honour of his wife, Mary, who was the daughter of the Bishop of Carlisle.

The town boasts a long history and began life as the Roman fort of Alauna in around 122 AD. It was established as a command and supply base for the coastal defences of Hadrian's Wall and was commanded by Marcus Maenius Agrippa, a friend of the Emperor Hadrian. Substantial remains of the Roman fort survive to the present day. The Fort of Alauna was the last in a series of forts from Hadrian's Wall to prevent the wall being avoided by a crossing of the Solway Firth.

The fort remained occupied for around three hundred years, during which time the town began to form around it. The fort was abandoned circa 410 A.D.

The town has a range of visitor amenities, including golf links, shoreline walks, a first class marina, coastal sailing, golf links and summer festivals and offers a wide range of accommodation to suit all budgets. The Victorian author Charles Dickens, Wilkie Collins and the artist L S Lowry were some of the town's more famous visitors. 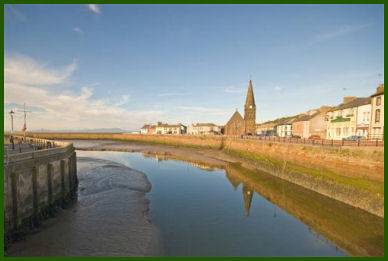 Fishing boats still stand in the harbour, where trawlers can be seen unloading their catch. At the Mill Street Link, a Pedestrian Walkway which links Senhouse Street with Mill Street there is a Mosaic known as Mill Race Lonning, which depicts the history of Maryport. A short distance away is Flemming Square where houses dating from the Georgian period are set around a cobbled square.

The Senhouse Roman Museum, which is well worth a visit, is dramatically situated on cliffs overlooking the Solway Firth, displays the largest group of Roman military altar stones and inscriptions from any site in Britain and unique examples of Romano-British religious sculpture. The collection, which was begun by the Senhouse family in the 1570s, is the oldest in the country, and is of international importance.

The Maryport Aquarium is an award winning visitor attraction and one of the best locations for viewing the varied marine life of the Irish Sea. The aquarium holds a huge variety of fish and invertebrates (starfish, lobsters, etc) in 45 carefully themed and informative displays. (Open 10am to 5pm Daily. Closed Christmas Day and Boxing Day)

The Maritime Museum at Shippping Brow relates the history of the town and of its most famous inhabitants, including Henry Ismay, founder of the White Star Line who built the ill fated Titanic and the family of Fletcher Christian of the Mutiny on the Bounty fame, who lived at Ewanrigg Hall, on the outskirts of the town.