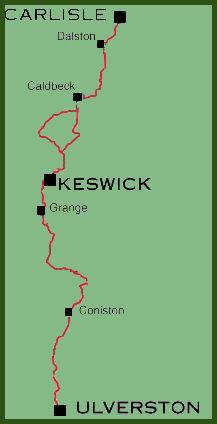 The Cumbria Way is along distance footpath which passes through the Heart of the Lake District, traversing some of the most spectacular scenery the area has to offer. The way links the two historic Cumbrian towns of Ulverston and Carlisle, passing through scenic Langdale and Borrowdale, Coniston, Derwent Water and Caldbeck.

The Cumbria Way, which stretches for 70 miles, was originally devised in the mid-1970s and has waymarked signposts for the benefit of walkers. There are a couple of sections of high, exposed ground but mainly the route keeps to the lower levels. The walk is suitable for any reasonably fit person.

*The route commences at the Cumbria Way Marker sculpture in the Gill at the centre of the town of Ulverston. The sculpture depicts a compass, and the conical design contains minerals collected from the route, including limestone from Ulverston and Sandstone from Carlisle.

On leaving Ulverston the first stage of the route crosses the southern Lakeland fells, and offers superb views over the vast tidal waste of Morecambe Bay, before reaching the shores of Coniston Water and continuing to Coniston village, in the shadows of the Old Man of Coniston. The village offers a wide range of accommodation.

* The second stage of the walk, is one of the most beautiful sections, passing through a mix of rolling farmland, fells and woodland. The route ascends to panoramic Tarn Hows, which although man made is the most popular of Lake District tarns, and is now preserved by the National Trust. The route goes on to pass the waterfall of Skelwith Force and along the banks of the River Brathay on to quiet and sedate Elterwater lake before entering the village of Elterwater at the entrance to rugged Great Langdale, where the going becomes significantly harder. 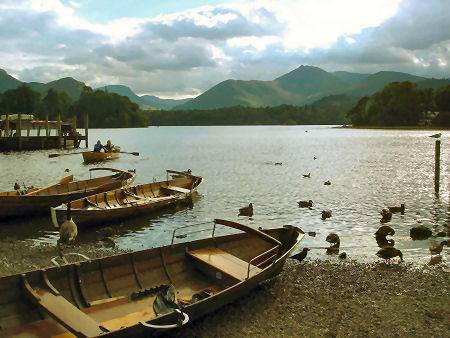 * From Dungeon Ghyll in Great Langdale the way follows the age old old packhorse route over Stake Pass, and descends into the Borrowdale valley with its spectacular rocky crags. The Cumbria Way continues along the shore of Derwentwater (pictured right) amidst the grandeur of the northern Lake District fells, before entering the busy town of Keswick.

*This section traverses rough windswept moorland that opens out below the looming bulk of the mountain of Skiddaw at 3,054 feet (921m) and the plateau shaped Blencathra 2,848 feet (869m). This stage is completed at the pleasant village of Calbeck, famous for its associations with the Westmorland hunter commemorated in song, John Peel, who lies buried in the churchyard of St. Kentigern's church in the village.

*In its final stages the route is flatter and follows the winding course of the River Caldew through wooded pastures, leaving the Lake District National Park and continuing, through the village of Dalston towards its final destination of Cumbria's only city, historic Carlisle. The seventeenth century market cross at Carlisle marks the end of the trail.


The Allerdale Ramble is a connecting signed route which is 54 miles long (87km) and commences at Seathwaite in central Lakeland. It shares the same route as the Cumbria Way from Seatoller to near Keswick, it then offers alternative high and low level options in the area of Skiddaw, before reaching the coast on the Solway Firth and joins the Cumbria Coastal Way as far as Grune Point.